While European legislators are considering adding a ‘right to be forgotten’ to data privacy laws to give Internet users some control over who owns their data, U.S. parents are worried about the reputational damage of their teens’ online activities and what advertisers are learning about them, according to a new report by the Pew Internet Project and the Berkman Center for Internet & Society at Harvard University, called Parents, Teens and Online Privacy. The research found that many parents are also continuing to take steps to mitigate and monitor their children’s online activities.

Chief among parents’ concerns about their online teens’ activities is the age-old worry about risks posed by strangers — 53 percent of parents said they are very concerned about their kids interacting with strangers online. But, more interestingly, almost half (49 percent) of surveyed parents said they are very concerned about “reputation management” on behalf of their kids and what they’re doing online. Forty-four percent of parents expressed the same level of concern about the impact on future academic or employment opportunities, and 46 percent flagged that high level of concern about how much information advertisers can learn about their kids’ online behaviour.

Taking the proportion of ‘very concerned’ and ‘somewhat concerned’ responses together, parents of online teens profess themselves to be more worried about the information available to advertisers about their children’s online behaviour than how their children are interacting with strangers online. 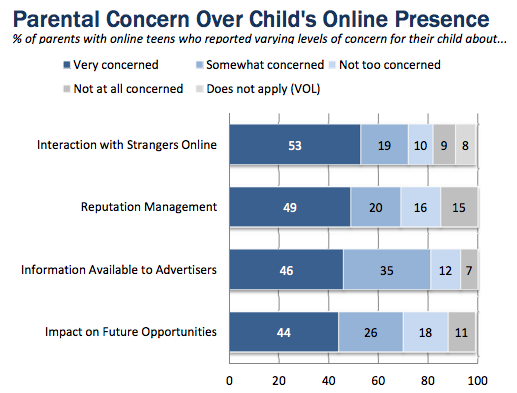 The research also looked at actions parents are taking to try to combat concerns about their teens’ online activities. It found that 44 percent of parents of online teens have read the privacy policies of websites their children are using, while half are using parental controls to try to control their online teens’ activities (a “statistically insignificant” drop from the 54 percent who reported doing so in 2011, according to Pew). 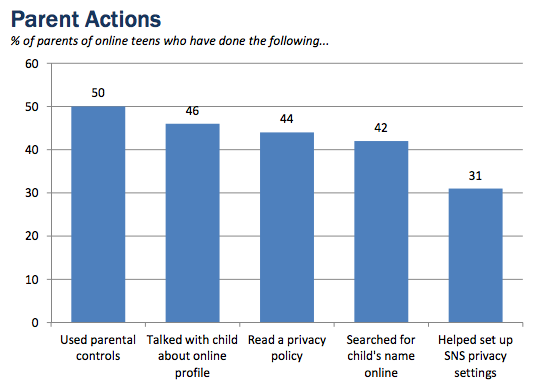 A large proportion (42 percent) said they had searched for their child’s name online — a behaviour that is most likely for parents with teenagers who are at the top of the surveyed age range (12-17), when the children are likely to be negotiating the college admissions process. 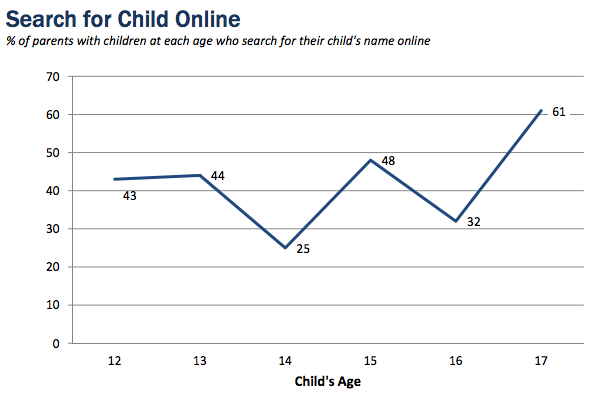 The research also found parents of online teens are increasingly using social networking sites themselves, with 66 percent saying they use a social networking site, up from 58 percent in 2011. According to previous research from the Pew Internet Project when both parents and teens use social networking sites, the vast majority ‘friend’ each other. Focus group discussions with teens in this latest piece of research found they have mixed feelings about being friends with their parents on sites such as Facebook — with many having a positive attitude but some only ‘friending’ parents because they feel it is expected.

Here’s the summary of the research methodology

The 2012 Teens and Privacy Management Survey sponsored by the Pew Research Center’s Internet and American Life Project obtained telephone interviews with a nationally representative sample of 802 teens aged 12 to 17 years‐old and their parents living in the United States. The survey was conducted by Princeton Survey Research Associates International. The interviews were done in English and Spanish by Princeton Data Source, LLC from July 26 to September 30, 2012. Statistical results are weighted to correct known demographic discrepancies.  The margin of sampling error for the complete set of weighted data is ±4.5 percentage points.

Considering the relatively large proportion of parents expressing high levels of concern about their kids online behaviour in this research, it’s worth considering how asking parents how worried they are about their teens’ behaviour might itself amplify any feelings of worry they have (for more on the importance of word order and phrasing in polling see this).