The NYT is on it, if by “on it” you mean the newspaper has successfully managed to get a Twitter account that parodied its news coverage suspended from Twitter by citing copyright concerns. According to the Facebook page for The Times Is On It, the issue with the account is not the content, however, but rather the avatar. [Update: the account is back]

Twitter has suspended my account over a claim from The Times that my avatar violates a trademark. I say fair use. Right now, I’m waiting for Twitter to process my request to fix the problem so I can get the account reenabled. But feel free to spread the word over how the country’s largest newspaper feels threatened by a small Twitter account right now. 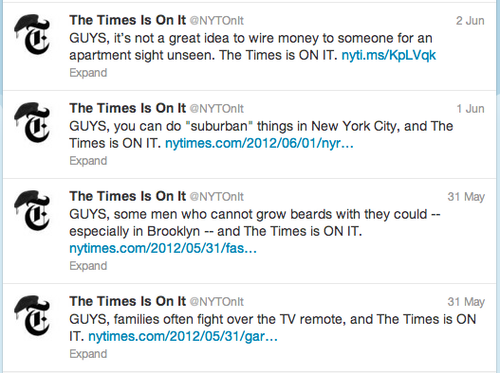 For those unfamiliar, the account @NYTOnIt, named one of the 140 Best Twitter Feeds of 2012 by TIME, hilariously mocked NYT headlines on Twitter, especially those of a fluffier nature. For example, a recent tweet still showing in Google’s cache reads “GUYS, women enjoy wearing pantyhose again, and The Times is ON IT. nyt.ms/SFsw.43,” linking to a trend piece on the topic.

The account was being run by Benjamin Kabak, a law student who also blogs at 2nd Avenue Sagas. He tells me that the account has been active since early 2011, started somewhere around May of that year. It had over 20,000 Twitter followers at the time of the suspension, he says.

“I created it on a whim with some friends because we would always laugh at the high-minded obviousness of The Times’ trend pieces,” explains Kabak, “and at some point, it got picked up by a few of the online media outlets.”

A Times spokesperson Eileen Murphy confirms the complaint with Poytner (and with us), saying:

“We did file a complaint with Twitter and it is our understanding that they have suspended this account for a violation of Twitter’s terms of service. We’re not seeking to disable the account however it is important to The Times that our copyright is protected and that it is clear to all users of Twitter that parody accounts or other unofficial Times accounts are not affiliated nor endorsed by The Times.”

We’re pretty sure she means “trademark,” not “copyright” here, but you get the idea. UPDATE: apparently so, reports All Things D. (We’re adjusting the headline accordingly.)

I have filed an appeal with Twitter so I may remove the materials they claim are problematic, and they say, “We are usually able to respond within a few days, but some issues may take longer.” A few days for something that isn’t actually legally infringing seems particularly egregious. We’ll see how long that takes.

What’s unclear is why the account suspension took so long, given the age of the account. We assumed that The NYT was late to act, but Murphy points the finger back at Twitter. “The timing is really Twitter’s as we made known our complaint to them some time ago,” she tells us, in response to our question about “why now?”

Kabak also confirms it’s his understanding that changing the logo will be sufficient to address The Times’ concerns, but he hasn’t yet heard back from Twitter, or been given the opportunity to state his case or change the logo. “They say they’ll hear an appeal but it’s very tough to reach anyone there,” says Kabak. “I wish The Times had reached out to me directly because I would have been more than happy to respond to their concerns. Even though I believe my usage of the mark they allege they own is defensible, I’m not trying to pick a fight with anyone.”

In the meantime, the parody headlines of this news are blowing on up Twitter:

GUYS, the New York Times is a gray, humorless institution and its lawyers are ON IT! @nytonit

Guys, corporate media lawyers have no sense of humor and the Times is on it! http://t.co/rnmnjj2W h/t @trevortimm @NYTOnIt

Twitter has parody accounts. and the NYT is On It. (eventually. 24 months late, TOPS) http://t.co/CnYDV5LW

GUYS, you can get a Twitter account suspended by making a bogus trademark claim, and The Times is ON IT. https://t.co/WySnOm9C

Guys, @nytimes says the avatar for the (hilarious) @NYTOnIt account violates their marks, & their lawyers are ON IT: https://t.co/teAyBhwD

GUYS, New York Times lawyers have historically been dicks about trademark. But @nytonit's not on it as it's not on.

Guys, @nytimes says the avatar for the (hilarious) @NYTOnIt account violates their marks, & their lawyers are ON IT: https://t.co/teAyBhwD

Update: And, good news: it’s back.