In the past months I keep hearing the same two themes about Mobli, a startup that’s trying to offer a subject-driven interface for viewing content.  The first, that the company has been head-hunting product and technologists rather aggressively across the local industry here in Israel. The second, that the company has received two acquisition offers. 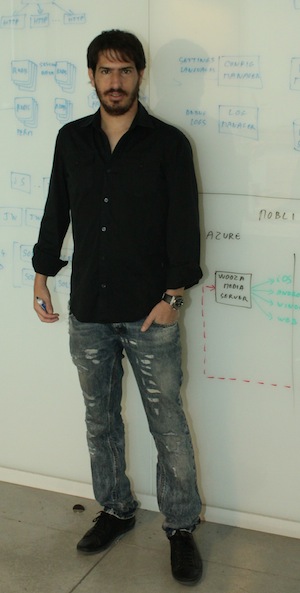 I’ve been bullish about the company since the first time I came across it so I took these rumors as an opportunity to check-in with Moshe Hogeg, who’s consistently been one of the most big-vision CEO’s I’ve come across in Israel, to see how things are going.

In short? All Mobli cylinders are firing!

The first issue I brought-up was head-hunting. The company is indeed retooling its product and technology management, as well as expanding across all of R&D. The first reason for this is that Mobli is going native on iOS & Android, along with ditching BlackBerry for Windows 8.

Much like Facebook, Mobli went down the HTML5 path, only to discover that it didn’t deliver performance-wise. Apps are being rebuilt from scratch natively to address this, but will also feature a new UX. I played with a development build that looked gorgeous and was super quick on an iPhone5. My favorite new feature is that when a user wants to post a photo, the app immediately offers the latest three images added to the gallery. No need to click into it to select. So convenient, I hope Instagram will copy it.

The decision to ditch BlackBerry for Windows 8 is strategic. I got to play with a tablet version, and far and away it’s the best looking app I’ve seen on Windows 8. As a side note, Mobli is enamoured with the new OS, saying it’s the platform that were able to develop the fastest for so far.

The new apps will start rolling out in a few weeks, Windows Phone 8 being the first.

The second reason for the head-hunting is a new search product the company is developing that Hogeg described as one aimed at showing the world through other people’s eyes. The three foundations for it are location, time, and relevance. One feature I can share is ‘auto-tagging’… I took a photo of my wrist watch and the photo was tagged (correctly) with ‘Tissot Wrist Watch.’ Surprisingly, the product will be a stand-alone and will be launched in a few months time.

Finally, I brought-up the the acquisition rumors I’ve been hearing about. Hogeg says that they’re in no rush to sell the company. No surprise considering that to date, Mobli has raised approximately $28M, $22M of which in its most recent round of financing by private investor Kenges Rakishev, and approximately $6.5M more in previous rounds that included celebrity investors such as Leonardo DiCaprio, Tobey Maguire and Serena Williams.

To my question of whether an acquisition offer would have to be 9-digits, Hogeg replied, ‘That’s for the company’s board to consider,’ and quickly added, ‘And it would have to be an offer by a company that will be committed bringing Mobli’s vision to a very large user base. That’s a big deal for us.’