The original Fitbit first saw the light of day over four years ago, and boy how things have changed since then. Now it seems like everyone from old incumbents to ambitious upstarts have offered their own takes on the activity-tracking formula, so how does Fitbit’s newest offering stack up to the competition?

The Fitbit One is…

A small, two-tone doodad that will set you back $99 and track your movement throughout the day. Most of the time, the black or burgundy Fitbit will live inside a similarly-colored silicone skin, and a sturdy metal clip mounted on the back keeps the Fitbit firmly attached to your clothing (the company recommends keeping it somewhere on your torso). When it’s not clipped to your person, chances are it’s bedtime and you’ve tucked it inside the black elastic armband to use as a silent alarm (more on that in a bit).

Before I ramble on for too much longer, know this: the Fitbit works like a treat. It ably tracks the number of steps I take, and its distance tracking seems to be more than adequate to boot — taking the One on one of my occasional runs saw distance counts that never strayed too far from the numbers the Nike+ GPS app offered up. The One is also smart enough to discern whether I’m just walking around or if I’m bounding up and down stairs, which then influences its appraisal of how many calories I’ve burned for the day.

The only thing that didn’t impress as much as I expected it to was the One’s oft-touted sleep tracking feature — I could never get the Fitbit to proffer an amount of time slept that matched up with how much sleep I thought I got. It’s not a dealbreaker for me, but appears I’m not the only one with this problem, and the company should really take a closer look here.

What else does it do?

The Fitbit experience is only as solid as its other half — the part that takes all of that activity information and turns it into a comprehensive suite of personal analytics. The process of getting all that data linked up with your Fitbit account is dead simple, too. All it takes to get started is plug the included wireless USB dongle in, pair it with the Fitbit by way of the included software, and start moving around.

Ideally that dongle will stay in one of your USB ports indefinitely, where it will connect with the Fitbit whenever they’re in close proximity. I wasn’t having any of that though, and took to syncing it exclusively with the companion iOS app thanks to the One’s low-power Bluetooth radio — a neat feature that Android users unfortunately can’t take advantage of just yet.

Fitbit veterans can feel free to gloss over this section, but once that data is uploaded, users can view their levels of activity splayed out in graph upon graph, as well as log their food intake to see if they’re running a calorie deficit for the day. The Fitbit itself only collects a fraction of the data the service is able to keep tabs on, though. Truly motivated folks can throw information about their weight changes, blood pressure, mood, and even glucose levels into their Fitbit accounts. 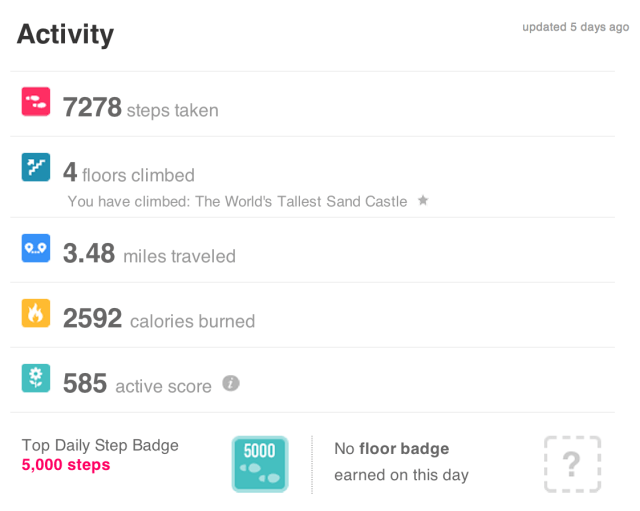 One of the most pleasant surprises about this thing was the silent alarm, which worked like a charm. Once the appointed time rolls around, the Fitbit’s tiny vibration motor begins pulsing in short spurts (protip: the vibration is strong if you insert the Fitbit with its screen facing your skin). My only beef? That it stops pulsing after about 10 spurts, only to start up again a few minutes later. Sure, it always managed to rouse me from my deep and fitful spurts of slumber, but I can’t shake the feeling that a continuous vibration would do the job even better.

And then there are the touches that you’ll hardly ever notice. If its screen is off and you pick it up, the Fitbit’s display will come to life with an encouraging (if terse) message to help keep users motivated. They’re not all that compelling — think “CLIMB IT CHRIS” and “SMOOCHES CHRIS” — but it’s a testament to the sort of attention to detail that went into making the One.

Now for the really annoying part

Really, if there’s one thing that irks me about using the Fitbit One, it’s having to keep up with all the little bits that come with it. I’ve been an avid user of Nike’s FuelBand for the past few months now, not so much because it’s my ideal activity-tracking solution — I’m no fan of the whole Fuel score conceit in the first place, and it’s awfully limited when it comes to functionality — but because I never really need to take it off until I want to sync it with my PC. It’s a largely self-contained system, and one I never had to spend much time fretting over.

Not so with the Fitbit One. I’ve misplaced the sleep wristband more than once these past few days which meant no silent alarm for me, and the stubby USB charging cable displayed a similar tendency to go AWOL. Oh, and it can’t actually be used to sync with the Fitbit, which strikes me as a bit of a missed opportunity. Instead, the dongle is a necessity for non-mobile syncing, as well as pushing updates to the Fitbit, so that’s another thing you’ll have to keep your eye on (I honestly have no idea where mine is right now).

At $99, it’s not the cheapest little tracking gizmo, but it’s definitely worth the premium over its little brother the Zip. I haven’t spent any considerable amount of time with the Jawbone Up (see John’s review for more on that thing), but my week with the Fitbit has been enough for me to stick my once-trusty Fuelband into a drawer. If you’re looking for a neat (and unabashedly geeky) way to keep tabs on how active you are, the Fitbit One is a wonderful choice — as long as you don’t mind keeping track of all those accessories.