I use the Solemate. That’s the highest recommendation that I can give a product. I use the Solemate around my house. The sound easily fills rooms. I travel with the Solemate to compensate for hotels’ lowly clock radios. With Bluetooth and clever storage for a 3.5mm cable, it is always ready for an impromptu party. Plus, it charges from microUSB. This is the best portable speaker for the money. Period.

The Jabra Solemate is a “me two” product in a category first made popular by the Jambox. Like the Jambox, it’s a small speaker with integrated controls, Bluetooth, and a speaker phone. But it’s a bit deeper than the Jambox. It’s about twice as thick and heavy as the Jambox. That’s a good thing.

The sound of a speaker can often be estimated by the weight of the speaker. The heavier the speaker, more often than not, the better it will sound. Heavier speakers often have more dense casings and larger magnets powering the speaker. In the case of the Solemate, it weighs 2.4 lbs, which is much heavier than any other speaker in its class. And it shows. The Solemate sounds great.

The Solemate employs four speakers. There are two tweeters and a mid on the front and a rectangle woofer on the back. An integrated amp powers the whole thing. 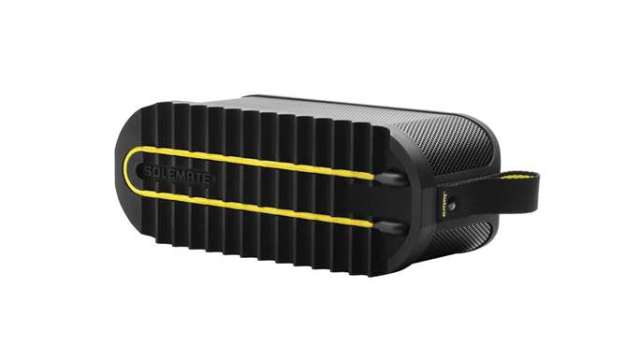 How does it work?

The sound will fill a room. The highs and mids are a tad bright but that’s to be expected with a small speaker. There’s a surprising amount of bass. The Solemate can make a table vibrate. Best of all, the bass doesn’t clip at high volumes, although it does take a back seat to the mids.

The clever cats over at Jabra devised a way to store a 3.5mm cable on the Solemate. There’s a little track within the “sole” of the speaker in which a small 3.5mm cable can stand ready. Sure, the speaker has Bluetooth and it works well, but there’s nothing like the simplicity of a dedicated cable. And with the Solemate, there’s always one on hand.

The Solemate costs $200 — a good chunk of change for a small speaker. But compared to other speakers in its class, it’s the smart buy. I find the audio quality to be superb from a small speaker. Highly recommended.