With billions of videos being created and uploaded to the web every day, I’ve been bullish on the idea of discovery apps for services like YouTube, Netflix, and Hulu. One of the startups that’s been focused on this market is Plizy, which just launched a new version of its iPad app and website for connecting to new and interesting videos.

Plizy first launched about a year and a half ago, with an iPad app that was designed to help users to discover and share videos based on their interests and social graph. Due to the billions and billions of video options out there, the app sought to give users a starting point, by introducing them to content that would be relevant to them.

The new version of the app still does all that, but it’s been overhauled to make videos more prevalent and easier to find, more easily searchable and shareable, and to provide more relevant recommendations the more that you use the app. Let’s start with that first part: When you first open the Plizy app, it will ask you to connect to Facebook. Once you’ve done so, and chosen certain social sharing settings — more on that later — you’ll be treated to a welcome screen that prominently displays a big video thumbnail in the center of the screen.

Don’t like it? That’s ok. Swipe to the right for another.

Want to check out channels from prominent content providers? There’s a list of channels, like The Onion News Network, Funny Or Die, TechCrunch TV (yay!), I Can Haz Cheezburger, and others that you can scroll through on the bottom of the screen.

Want to search for any video in particular? There’s a search box in the upper right-hand corner. 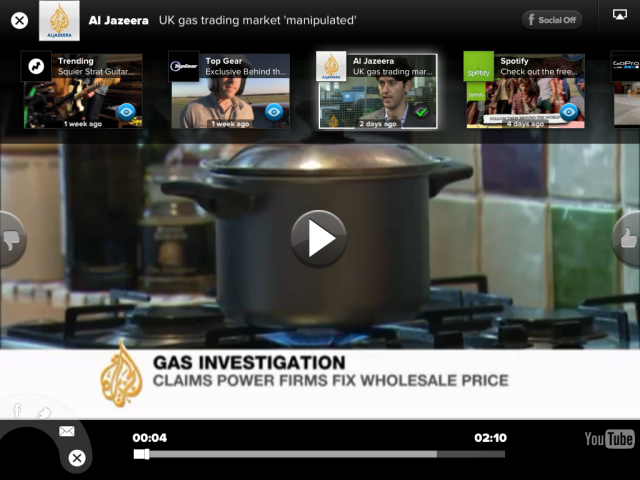 Oh, and if you’re not really into Web video, but want to watch movies and TV shows, Plizy has got you covered: It’s integrated with video services like iTunes, Netflix, Hulu Plus, Crackle, HBO Go, and Amazon Prime, allowing you to search and navigate through “premium” video content found on those services, and providing deep linking into those apps on the iPad. Plizy has also curated its own channels of content, rounding up appropriate content providers for 20 different categories such as comedy, fashion, and others.

Plizy still makes recommendations based on things that you’ve “liked” on Facebook, and shows you what content your friends have liked as well. It also allows you to provide feedback in the form of a “thumbs up” or “thumbs down” and bases its video recommendations on that. It also takes into account what types of videos you’re watching, and how recently you’ve watched them. You might binge-watch snowboarding videos for a while and see more recommended as a result, but if your viewing behavior changes and you get into surfing, it’ll respond appropriately. 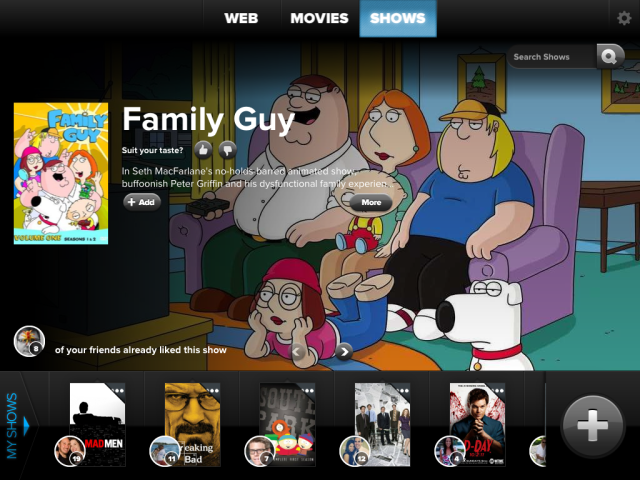 In addition to viewing videos, Plizy also wants to make it easy for users to share. It’s got the usual ability to explicitly share out through Facebook, Twitter, and email. But it also allows users to seamlessly share what they’re viewing through Facebook Open Graph. But, since privacy is so very important to its users, they are able to explicitly choose how much, and what, they’d like to share when first signing up. There’s also a social tab at the top right of the app to allow users to switch up their sharing settings at any time.

So the video discovery market is absolutely swamped right now — there’s Showyou, there’s Fanhattan, there’s Squrl and Vodio and a few others.

Plizy wants to go beyond just video discovery on the iPad — it’s also looking at ways to bring together all the video services that its users are already hooked into, as well as perhaps helping them to access their own videos on different devices. That’s what the whole “media center in the cloud” thing is all about, according to CEO Jonathan Benassaya. The company promises that it will have more to share over the coming months. In the meantime, the new app looks pretty slick. Download it, maybe?