Not to be outdone by Facebook’s new mobile share button, Twitter has just added an option to “Share this tweet via email” so you can send content to less tech savvy folks. The button appears in the ‘more’ menu alongside reply, favorite, and retweet. It could be a powerful way to spread the service and convince new people to sign up. It’s rolling out over the next few weeks. 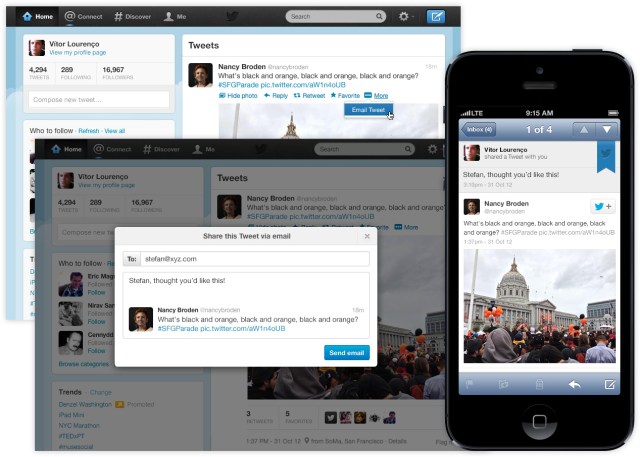 Once you click the button on the web it will bring up an in-line email composer. On mobile it appears to pop up your native email app.

Twitter has made a huge push over the last year to increase mainstream awareness of the service. Televised sporting events often feature related tweets or calls to publish your own, and Twitter was all over the Olympics. Commercials and billboards sport hashtags, and Tweet buttons are featured around the web.

But Twitter wants the people seeing these to actually sign up. It doesn’t need them tweeting. It’s happy to have passive content consumers. But Twitter wants to be able to serve them targeted ads so it needs them signing up. What better way to get grandparents and the technologically apathetic to join than having their friends and family show off content from the service?

If everywhere you look you see that little blue bird, from your TV to your email inbox, eventually you’ll surrender and sign up.