Mozilla just released its annual financial report for 2011, as well as the annual “State of Mozilla” report by the organization’s Chair Mitchell Baker. According to this report (they traditionally arrive at this time of the year), Mozilla’s total revenue (including the Mozilla Foundation and all of its subsidiaries), was $163 million. That’s up about 33 percent from the $123 million it reported in 2010. The majority of this revenue, the organization noted, still comes from Google. Mozilla’s total expenses for 2011 amounted to $145 million.

As Mozilla notes in its report, about 85 percent of its royalty revenue in 2011 came from its contract with Google. While Mozilla has similar deals with other search engines, including Microsoft’s Bing, it’s clear that the majority of Firefox users still prefer to use Google. “The receivable from this search engine provider [Google] represented 77 percent and 64 percent of the December 31, 2011 and 2010 outstanding receivables, respectively.” 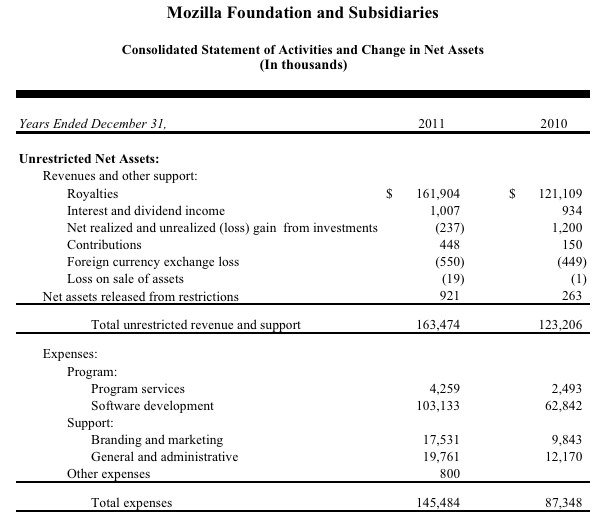 As a non-profit, Mozilla is obviously in a pretty unique position in the Internet space. It doesn’t really have to worry so much about its revenue given that it doesn’t have shareholders. Instead, the organization’s mission is simply to make the web better and push it forward. As Mitchell Baker notes, after 20 years of developing the Web, we can now “see how the Web can make yet another leap in its usefulness, fun, business opportunities and social benefit.” Baker cites the seamless integration of the Web with mobile devices, the ability to write web-based mobile apps and the ability to control your identity through the browser (something that continues to be a priority for Mozilla) as examples for the kind of technologies Mozilla aims to work on. ”

“Imagine,” she writes, “understanding the Web, feeling competent to make things, to change what exists and create things that meet your particular needs. Imagine where Web literacy is fun, and extends beyond to citizens as well as hard-core programmers.” Mozilla, she writes, has the financial resources to do so and a “vision of this world, the architecture, the technology and the product plans.”

You can find the full financial report here (PDF).