3Scale has discounted the cost for managing APIs in the enterprise through a new plug-in it has added to Nginx, the open-source web Server technology. The plug-in runs inside Nginx and connects to the on-premise 3Scale service, which allows a customer to extend the modules that Nginx has for security, policies, etc. It connects to 3Scale features such as analytics and security services.

3Scales’s Steve Willmot said to me in an interview here at the Defrag conference that the service starts at $2,500 per month for five million API calls per day or 150 million calls per month. They also offer a standard tier of 250,000 API calls per day at $125 per moth. 3Scale also offers a free service. 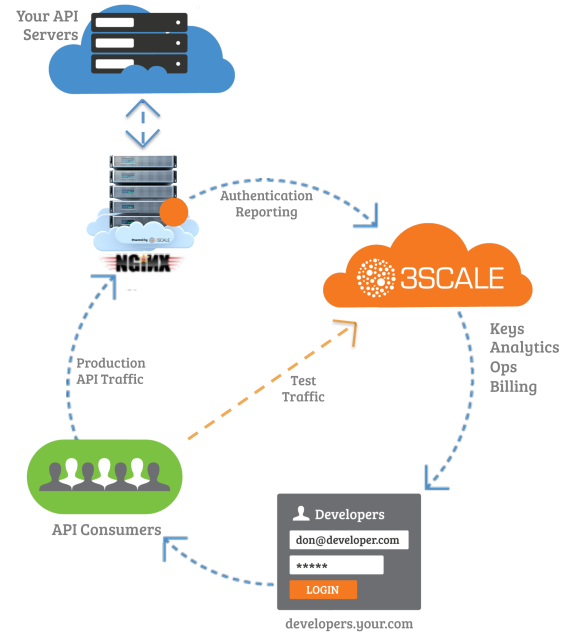 With Nginx, Willmot said a developer enters a URL for their API endpoint, then defines mapping rules through the 3Scale interface. It is then configured and added to the 3Scale service.

API evangelist Kin Lane said 3Scale offers a pretty robust service for the price that it charges. It’s a cloud-type model with a freemium offering. You essentially pay as you go. This includes the integration of Swagger, a “specification and framework implementation for describing, producing, consuming, and visualizing RESTful web services.” 3Scale uses Swagger to provide an open-source spec of the customer’s API that provides interactive documentation to make calls on the service. According to Swagger, the documentation of methods, parameters and models are tightly integrated into the server code, allowing APIs to always stay in sync.

Willmot said that the company wants APIs to be easy to create, but it is important to have capabilities such as access control and analytics to make the service complete. Integrating open-source technologies gives 3Scale the capability to offer affordable API management services.

In comparison, the Apigee platform costs $100,000. Anant Jhingran, Apigee’s vice president of data, said the company has also launched its own cloud service that is free to start but increases in price after the enterprise customer surpasses 3.5 million API calls a day. Mashery’s costs are in the range of $2,500 per month and up.

Jhingran told me today at Defrag that the market for APIs is broad and deep. There will be customers who want a platform like that from Apigee and those who want a service like 3Scale. It’s a rising tide that will benefit a broad market of users.

Mashery CEO Oren Michels said it is hard to do an apples-to-apples comparison between a software tool like 3scale and a multitenant SaaS platform like Mashery:

Leaving aside the deeper feature set we provide, there are lots of hidden costs in software-based solutions that are included in the SaaS service fee. That said, we have customers at a range of price points. We have a program for eligible bona fide startups with pricing that starts at a fraction of the $2,500 price you cite. And depending on the services used the price can be much higher as well.

All in all, the market is broad and diverse. But the community is more than enterprise players. 3Scale is offering a service that provides developers and companies of all sizes to get access to robust API management services at an affordable price.