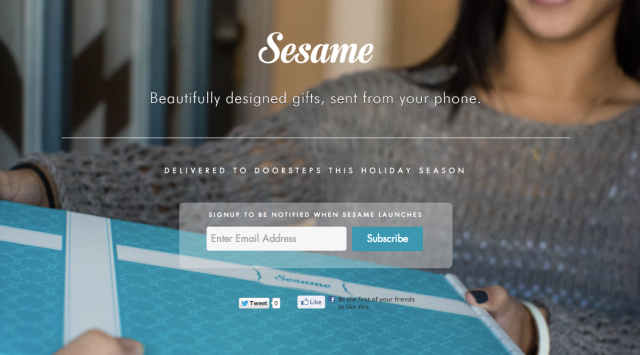 Not fazed by Facebook’s high-profile launch of Gifts, Sincerely is barreling into mobile gifting, too.

Best known for the postcard app Postagram, the startup has amassed a network of 1.2 million members who have sent cards to about 800,000 different addresses. That gives the startup a good base to start from with sending more lucrative physical goods like gifts.

“Gifting is a massive market,” said the company’s CEO Matt Brezina. “No company is going to own it all. Facebook’s brand doesn’t say, ‘Trust me with a credit card. Trust me with your mailing address.’ And it definitely doesn’t say, ‘We have excellent customer support.’ Our brand says all of those things. This is all we do.”

The upcoming gifts launch, under the brand Sesame, is the latest step in a long planned-out journey for the company. Sincerely launched early last year with a simple Instagram app that turned photos into postcards. From that, they launched another one-off app called PopBooth that would turn an iPad into one of those classic photobooth cameras that spit out a strip of four photos. Another app called Ink was for greeting cards. Then they created a platform for third-party developers to ship printed photographs to their users.

All of that has led them to a point where they’ve accumulated hundreds of thousands of paying customers.

“We focused on the simplest gift you can send in the mail – a postcard,” Brezina said. “Postagram wasn’t about making money. It was about building the network.” The startup picked up thousands of mailing addresses by letting new users send 1 free card to up to five unique addresses.

The company isn’t revealing too many details about Sesame, which will come out in a few weeks. We don’t know about what the gifts will be or who the partners are. There’s just that teaser image at the top with the blue box.

“We think we can compete with Amazon and Facebook on having the most comprehensive address network in the world, really focusing on the 20-30 relationships you care about most and having a truly beautiful gifting experience — not just a product sent in a brown box,” Brezina said.

“We think telling people what they are going to get before they get it is pretty lame,” Brezina said. “It ruins the surprise but we will let people return or exchange gifts for up to 30 days.”