Hey designers! You could build another app. Or you could save some lives by entering the White House’s Health Design Challenge to give the electronic medical record a much-needed redesign. Right now the thing’s an abomination — all courier font, hard to read. If you can do better, you could win $25K and get your design rolled out to 6 million VA patients and open sourced for all the world’s doctors.

The Health Design Challenge is being presented by Designer Fund, a new community of philanthropic angels and mentors who support and invest in designer-founders. Co-director Ben Blumenfeld, who was a designer at Facebook for five years, considers the contest to be perfectly aligned with Designer Fund’s mission. “There are so many meaningful problems in the world. Healthcare, clean energy, environmental issues, city design. We feel like we’d be able to make a much bigger dent in these problems if designers went at them.”

There’s plenty of design to be done here. Just look at this mess that’s currently used as an electronic medical record. This “Blue Button” design was meant to give veterans access to the text of their records. However, it’s way too hard to quickly read or find the important parts. That means it takes longer for doctors to give care, and they spend more of the time with patients staring at a screen instead of comforting the sick.

So go at it. Build a visual architecture that organizes the information by importance, that’s easy to scan, and that anyone can understand. You have 17 days to submit your designs. The government’s site has all the rules and required sections. Submissions will be judged by Blumenfeld and a panel of other designers, government figures, and healthtech entrepreneurs.

The best designs will compete for $50,000 in cash prizes. A hybrid of the best versions will be open sourced on GitHub and rolled out to the entire Veteran Affairs medical system, which supports more than 6 million people who’ve served the United States. With the White House’s support and financial incentives for doctors to go electronic, your design could reach even more patients. You might even end up working with big EMR startups like Practice Fusion. 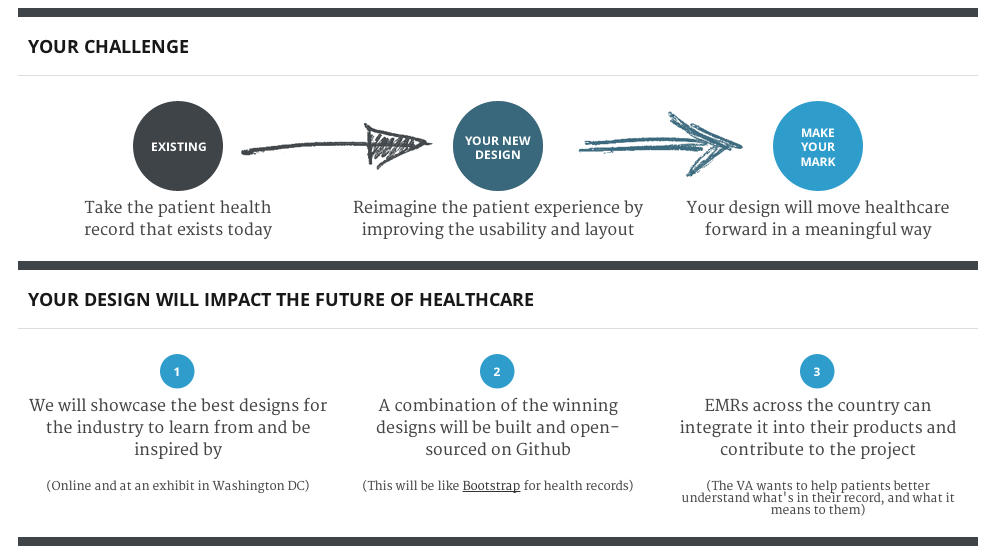 Blumenfeld’s got a tip for those participating in the challenge. “You want to make sure the thing you’re designing works for the intended audience. This isn’t designers designing for each other. Put your design in front of your parents or grandparents and see if they understand it. Put it in front of someone with sight or comprehension difficulties. Don’t just test it on young people in tech.”

He’s fired up about the project and is asking his fund’s network of over 75 world-class designers to get behind it because the Health Design Challenge “skews towards action —  it’s taking it to the next level. Let’s not just come up with ideas and celebrate ideation. Let’s choose one, implement it, and get it out to millions of people.”