(Or pissing money up a wall?)

Captive Media, the UK interactive washroom startup, has raised a $700K funding round to help roll out its product — a “pee controlled” media system (yes, you read that correctly) — across major venues, and to bring on board more big-brand advertisers from which it hopes to make the bulk of its revenue, long term.

Launched in late 2011, Captive Media is working on the premise that the average 55 seconds a man stands in front of a urinal during each “visit” to a public washroom is a wasted advertising opportunity, especially since the audience is so captive. Its solution is an interactive media system installed above each urinal, which uses an infrared beam to enable simple games and quizzes to be “pee controlled”. Basically, punters are asked to aim left and right as they interact with the Captive Media system, and get shown ads — sorry, engagement marketing — in return. 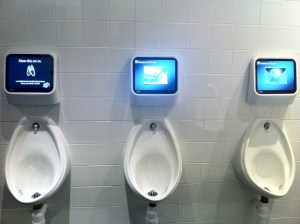 The tech is potentially quite clever, too, since it can be retrofitted to most urinals; nothing is installed onto the urinal itself except washable stickers to mark the interaction points, while the infrared beam takes care of the rest.

Now, I know what you’re thinking: is there no time and space sacred from the intrusion of advertising? Not if Captive Media has its way (although, at least Mark Zuckerberg isn’t standing over your shoulder). It claims to have already installed its system in eight venues in various parts of Europe, delivering over a million game impressions in the 10 months since launch. I’m also told that the company recently struck a deal with the Generator Hostels chain, with units due to be installed in Copenhagen and Barcelona by the end of the year.

A number of brands have jumped on board, too, such as DrinkAware, Macmillan Cancer, Heineken, Tiger, Corona, and Pepsi. That list includes quite a few drinks companies, also pointing to the potential for Captive Media to create that much sort after and lucrative ‘urinal loop’.