The language learning service Duolingo currently has about 300,000 active users and continues to grow rapidly. Starting today, the service’s users will also be able to work through their lessons on their iPhones, as the company just launched its first mobile app.

Just like the web version, the mobile app will be available for free and will help its English-speaking users learn Spanish, German, French and Portuguese (with Italian coming before the end of the year). Users who speak Spanish, Italian and Portuguese can use the tool to learn English. The app is currently only available for iOS, but the team plans to launch an Android app next year.

To make better use of the phone’s touch-screen interface, the Duolingo team, led by CAPTCHA co-inventor Louis von Ahn, decided to add a few mobile app-only features as well. New in the app, for example, is a special type of interface that “gives you a word bank and lets you tap words to enter your answer.” This, says Duolingo, saves you from having to type on the phone’s relatively small screen. 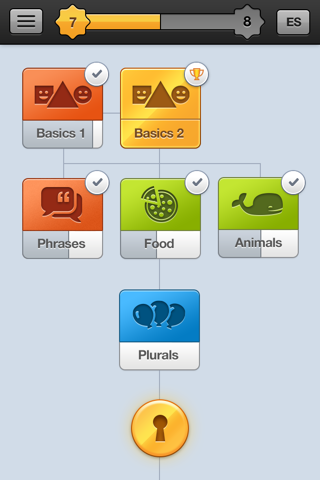 The team also broke down the program’s lessons into smaller chunks on the phone to make them more bite-size and easier to complete during short breaks.

The average Duolingo user, the company says, uses the service for about 30 minutes per day. As von Ahn told me when I talked to him earlier this year, language learning is often a luxury for English speakers, especially in the U.S. For many users in Spanish-speaking countries, though, learning English is often a matter of getting a job or promotion and it’s these users that drive up the average usage time.

Unlike other services like Rosetta Stone, Duolingo is available for free and teaches vocabulary, reading, writing, and speaking. Users progress through a role-playing game-like skill tree and earn skill points for every lesson they complete.

The cool idea behind Duolingo, of course, is that it’s not just about learning a language but also about translating. As students work their way through lessons, they start translating websites and documents. The company’s plan is to start allowing companies and individuals to upload their documents and to start charging them for those translations. In addition, the project also aims to make much of the web available in languages other than English, which still accounts for 50% of what’s written on the web.

Duolingo, which launched to the public in June 2012, raised $3.3 million in a Series A round led by Union Square Ventures last October and $15 million is a Series B lead by NEA this September. Von Ahn, of course, has quite a track record of building successful companies. He sold his first startup, The ESP Game to Google in 2004 and the search engine also bought his reCAPTCHA project (which shares quite a few ideas with Duolingo) in 2009.