“At this scale, when you help people save 10 minutes or an hour, you’re saving lifetimes of pain…And we’re just getting started.” That’s what CEO Drew Houston thinks about his company hitting 100 million registered users and 1 billion files saved a day. Here Houston tells me how he feels about being entrusted with so many memories, and how Dropbox will be the data layer connecting the future where every device is smart.

Drew’s an inspiring person to interview, so much so that I wrote a poem about Dropbox. But here’s the CEO’s thoughts.

“100 million registered users is a symbol, putting us in a new category with an elite handful of companies that have ever reached that audience” says Houston. That’s up from 50 million users and 500 million files saved every 48 hours as of May 2012, and 25 million users and 200 million files saved per day in April 2011. Dropbox is now on 250 million devices in over 200 countries, and is served in eight languages, including two new ones starting today: Italian and Castilian Spanish.

“It puts a quantitative spin on that feeling that we’re solving really important problems for a big chunk of the world,” not just Silicon Valley, Houston tells me. “Our users are trapeze artists, high school football coaches — I got cornered by a couple of theoretical physicists who said Dropbox lets them collaborate across the world and share their experiments’ results. They were raving about how it’s driving their research.”

Drew says Dropbox is fulfilling the promise of the cloud. For users, he believes “Dropbox is the first day of the rest of their life. I can take my laptop, throw it in the water, go to the Apple store, and start over like nothing happened.”

It really hit home for Drew when he heard the story of a panicked father who’d recorded the first years of his child’s life on his phone. Then one day he was pulling clothes out of the washing machine, heard a clanking sound, and saw his memories of his daughter dripping out of the phone. Then he remembered he’d turned on Dropbox Camera Upload, and all those moments were safe and sound.

Dropbox’s scale and that mission, to preserve our digital histories, are attracting great employees. Drew tells me that this year they “started at 90 people and just crossed 250. It’s the biggest growth year for us by a long shot. Now for any job opening, we can go after the top five people in the world. We want a designer? Ok, who built the iPhone?”

For example, Drew cites Aditya Agarwal, who used to be a director at Facebook but became Dropbox’s VP of engineering when it acquired his startup Cove. “Here’s someone who’s changed the world. He built news feed and [Facebook] search. He was employee No. 9. And he said ‘Dropbox is the only place I could have an impact like that again.'” The firepower to pull in employees like Agarwal is just one benefit of the $257 million in funding Dropbox has raised.

Dropbox has big ambitions, so it’s going to need the talent. While it might seem simple enough stitching together data from your laptop, phone, and tablet, as we enter the age of the “Internet of things,” it’s going to get a lot more complicated. Drew says Dropbox has a chance “to make your phone smarter, your TV smarter, your car smarter. In that sense we can be the fabric that ties everything together.”

The company’s independence might give it the best shot at becoming the data layer the way Facebook became the social layer. Apple, Google, and Microsoft all have their own cloud storage systems, but they don’t necessarily cooperate with each other’s devices. Drew declares: “Not one company is going to make everything. [With Dropbox] you don’t have to worry about what logo is on the back of your photo or computer.”

…Or your refrigerator, thermostat, or sound system. Becoming useful to people who don’t have all those fancy smart devices, just the basic ones like in emerging markets, is a big focus for the company. “There’s 2 billion connected internet users now and that’s going to go to five in the next few years. Anyone with a computer or a phone needs something like Dropbox.”

But there’s a lot of work to do to get to that point of being the omnipresent data layer that lets our personal memories and professional materials criss-cross between devices. “At our age, Apple hadn’t built the Macintosh, Microsoft hadn’t built Windows. We are now playing in another league and really have an opportunity to do amazing things at scale. This is the first stop on a new road to a billion.” 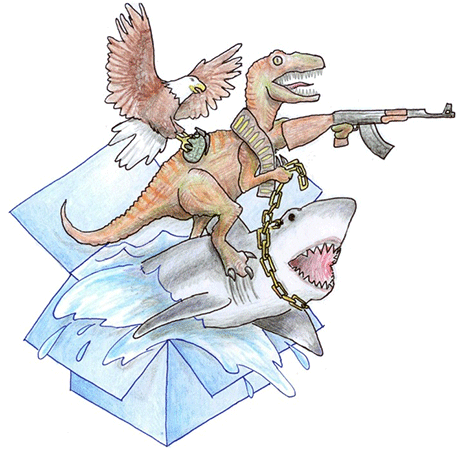 “So many devices, all in their shells

Meanwhile memories trapped in ourselves…”

…read the rest of my poem for Dropbox.