Apple has once again come out on top in a RetailSails analysis of the top performing brick-and-mortar U.S. retail chains. Apple Retail does around $6,050 in sales volume per square foot in the United States in 2012. That’s more than double the next chain on the list, luxury retailer Tiffany & Co. In general, Apple is rubbing elbows with boutique operations, like Coach, Vera Bradley and lululemon, which is in keeping with its perception as a high-end brand.

Tiffany & Co. brings in $3,017 per square foot, while big box stores like Costco and Sam’s Club bringing in the highest sales volume per store, owing likely to their indiscriminate, wide-ranging inventory selection. Apple still ranks among the top 10 in terms of sales per store, however, impressive since it’s essentially the only one on that list that doesn’t occupy massive retail footprints in terms of its individual locations. Overall, Apple brought in an average of $51,148,000 per store. 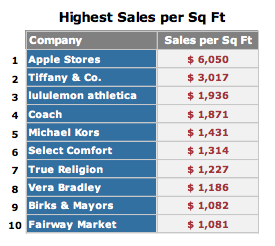 Apple’s sales per square foot grew from last year, when it averaged $5,626 per foot. Its overall improvement in retail performance was discussed during its most recent quarterly conference call, when the company revealed that it did $4.2 billion in retail sales in Q4. Apple also opened 33 new stores in 2012, making a total of 390 Apple Retail locations worldwide. Next year, it plans to open roughly the same number.

Despite Apple’s strong retail performance this year, the company recently decided to drop John Browett, the poached head of UK chain Dixons who was brought on as SVP of Retail at Apple at the beginning of the year. Browett’s exit was said to be the result of missteps including a staffing process change that proved embarrassing for the company, and Apple is now actively searching for a new head of retail.

Anyone care to put a wager on where Microsoft Stores will show up in these rankings next year?