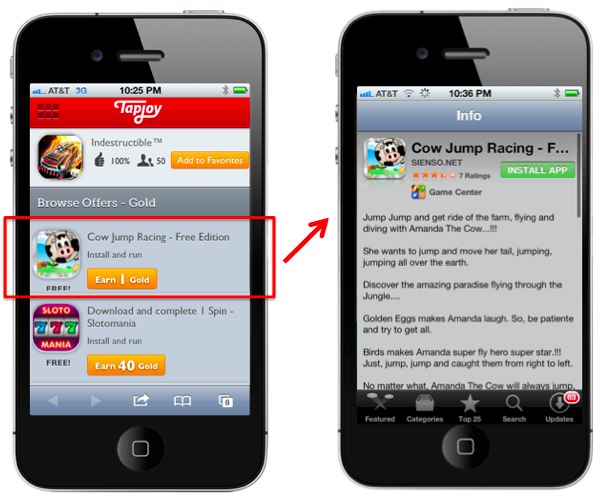 Memories of Scamville have faded, and we don’t see the brazen customer ripoff schemes from the big gaming companies these days.

But the main company behind Scamville, Offerpal (the company renamed as Tapjoy after the Scamville disaster), just can’t seem to find an honest way to make a buck. In their new incarnation Tapjoy is the primary purveyor of paid app downloads, and it has made a mess of the mobile app ecosystem.

Here’s how it works. You use a mobile app and want virtual currency to do things (usually a game). In the old Scamville you’d get signed up for a recurring mobile phone charge or some other nonsense. Today you just get offered currency to download other apps.

Sometimes those apps are free and sometimes they aren’t. Uniformly, they suck. But Tapjoy gets paid for the download and they pass on some of it to the first app. The app developer buying these downloads gets a massive spike in activity, driving it up the leaderboards. Which means more downloads.

Within a few days Apple catches on and removes the app. But then the devlopers just create a new junk app and the whole system starts again.

Apple has waged war on incentivized app downloads for a long while now. See this post from 2011, for example, when Apple started rejecting apps that included these offers.

Tapjoy and others evolved, simply moving the offers to HTML pages opened with a browser, something Apple can’t review during the approval process (because it isn’t turned on yet). The offers remained; the only real difference was Apple didn’t even get their 30 percent cut any longer.

Apple is coming down hard on apps that use HTML pages to push offers, too. It’s not clear how they’re doing it, but it’s clearly having an effect.

Example – Glu Mobile, a public company, gets 13 percent of their overall revenue from Tapjoy. In an earnings call this week CEO Niccolo de Masi had some bad news to report:

We have also recently experienced degradation and iOS advertising revenues as Apple has extended it prohibition of incentivize advertising to include any linkage to external HTML 5 sites.

This reduces revenue from the Tapjoy iOS channel. As a result our expectation for Q4 are being substantially lowered to reflect these factors as well as to delay our five new titles while our President of Studios completes its 60-day review.

I can’t wait to see what Tapjoy does next in this ever-escalating arms race. One thing’s for sure – it’ll be very profitable. And very shady.