Like Pro, the new top-tier service includes outbound calling, call recording, local numbers, custom hold music and other upgraded options. And today, it also offers another new feature which is actually available to both Pro and Business account holders: the option to pay for a Toll-Free number for an extra $10/month.

Most importantly, however, the Business version brings account management features which are critical for enterprise customers, or any other organizations where administrative oversight of the UberConference online service is needed. “We think a lot of SMBs will be doing it, and a lot of large companies as well,” says Craig Walker, CEO of Firespotter Labs, which makes UberConference as well as restaurant-focused apps like Nosh and NoshList.

“The administrator – the person who buys the account – can see from their screen who in their organization has used one of the accounts,” explains Walker of the new UberConference business plan. “If someone leaves, they can suspend the account. It really gives an online dashboard for the administrator of the company to manage all of the sub-accounts for the employees.”

The Business service is also being made available in the Google Apps Marketplace in order to support customers already sold on cloud-based solutions like this. Here, administrators can add the UberConference app to their domain, making deployment less of a headache for end users and I.T. In Google Apps organizations, users can simply select the app from the “More” menu on Google’s black bar at the top of their page. If they don’t already have an UberConference account, it will create one immediately based on their Google Apps credentials. 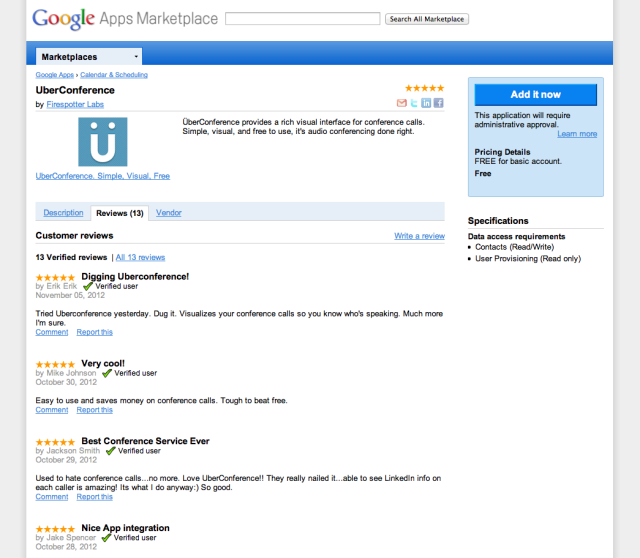 Additionally, UberConference has added live chat support on the website, which will allow paying customers access to higher level of responsiveness than the previous email support option did. Pricing for this new service starts at $10 per seat, but that rate drops for larger organizations. For example, those with over 20 employees pay $8.50 per seat instead.

As for UberConference traction, Walker declined to provide numbers, but previously said the service reached “tens of thousands” of users. And now? “It’s a much larger ‘tens of thousands’ than before,” was all he would give us when asked for an update. He would say, though, that call duration time has increased, which demonstrates engagement that’s growing beyond those who are just testing out the service. In July, the average call time was 31 minutes, and today, it’s at 35 minutes.

The other thing that’s growing? The company itself. Its headcount has popped up from around 15 people to 25, following its $15 million in Series B funding this summer, and the team is now getting settled in new offices in San Francisco.