Facebook’s measure of presidential election mentions shows it’s become an international news discussion channel. There were 71.7 million election-related mentions in the US, but also another 17 million abroad for a total of 88.7 million worldwide. “Vote” was the most popular word said on Facebook while to polls were open, while “Obama” took the top spot later in the day.

Other key stats from Facebook’s study included that men were more likely than women to talk politics in the run-up to the election, but that evened out as the polls opened. And while adults 35 to 54 and 55+ were most likely to discuss the debates, the youth spoke up on election day, with 25-34 year olds contributing the most mentions. Facebook noted that on its Talk Meter scale, the quantity of election mentions in the US scored a 9.27, compared to 8.62 for the 2012 Super Bow, and 6.1 for the Giants’ recently World Series win. Mentions abroad hit an 8.28 on the Talk Meter.

As for the most popular memes, Romney’s confession that he likes “Big Bird” despite being willing to cut funding to Sesame Street’s host channel PBS turned the term into the top pre-election day phrase. It narrowly beat out another Romney gaffe, “binders full of women”, though both got a surge of mentions on November 6th. 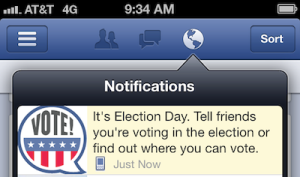 Facebook did its best to encourage discussion of the election, specifically asking people to “tell friends you’re voting” through notifications and home page banners. That apparently worked considering “vote” was the most popular term until the polls closed. 9.6 million total people told Facebook they voted using the button at the top of the news feed.

All those mentions and callouts don’t seem to have increased youth voter turnout, however. The Center for Information and Research on Civic Learning and Engagement says that exit polls showed 49.3 percent of eligible voters age 18 to 29 cast their ballot. It expects that percentage to rise to 51 as the votes are counted — which is almost exactly the same as the voter turnout in 2008. That’s somewhat disappointing considering Facebook has grown from 145 million to 1 billion monthly users in the same time period. 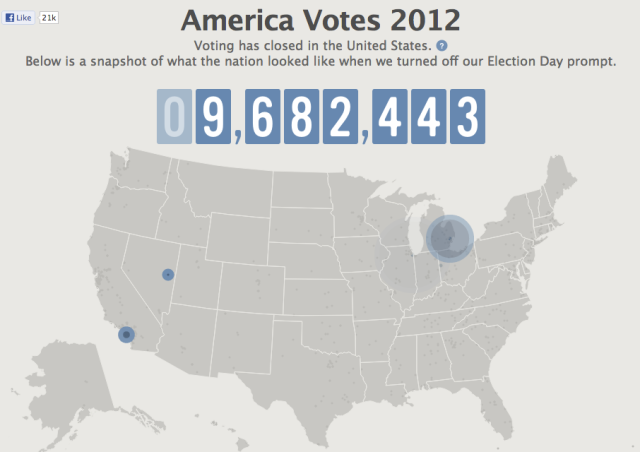 Here’s the full lists of the most mentioned terms across Facebook throughout the day of the election:

Correction: 88.7 million is the total number of mentions worldwide, including the US, not outside the US.