We knew that Square did a huge deal with Starbucks that would eventually wipe out the need for old-school cash registers, and the company shares tonight that the shift is in full effect.

Starting now, over 7,000 Starbucks stores in the US will be able to accept Square Wallet. Don’t pull a card out ever again, it’s all ready to go. If you haven’t used the service at other locations, it’s a super time-saver, and I imagine that Starbucks will save tons of man-hours and annoyances by eventually not having to deal with swiping cards.

This is the future, folks. And it came to fruition quickly:

Immensely proud of the teams at Square and Starbucks: 7,000 stores launched 3 months TO THE DAY after signing the deal. #nailedit

Here’s what Starbucks Chief Digital Office, Adam Brotman, had to say about it: 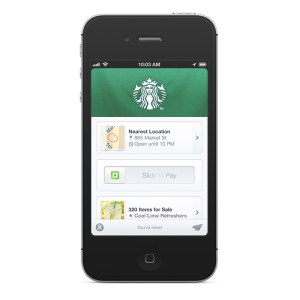 Starbucks believes in the values and vision of Square, and just three months after announcing our partnership with Square, we are thrilled to make the convenience of paying with the Square Wallet app available to our customers starting today.

Here’s a quick little video explaining the launch of the integration. I’m so using this tomorrow when I get up.

What stores and outlets will sign deals next? The possibilities are endless for the company that has raised $341M to date, including a round featuring Starbucks itself. Not only does getting rid of registers extremely cost-effective for Starbucks, but the freedom of being able to move around and use a mobile device means that folks can make drinks and take orders at the same time.

The days of “working the register” are over.