There’s a prevalent myth in Silicon Valley, the myth that people aren’t snobs here. This isn’t true. A sort of reverse/meta-snobbery exists here, mostly intellectual in its nature, and the line between the alphas and the betas is extremely clear cut for those who can see it. “We’re so snobby we’re above snobbery.”

Yes, much like Los Angeles and New York, very few people who are here are from here and almost all of us who are here at one point aspired to be here. And, maybe because we’re not as pretty as New York or Hollywood, we’d like to think we’re smarter.

“I remember what she was like when she landed here and she was nobody,” somebody said about some girl on that Silicon Valley TV show that absolutely no one is writing or talking about, and definitely not hosting premiere parties for or gossiping about or tweeting constantly regarding or poring over the pitch decks for. Ugh. “Do you remember what you were like when you landed here and were absolutely nobody,” I responded. “We all at some point were that right?”

In its pre-premiere marketing, this show that obviously nobody cares about excelled in its efforts to manufacture conflict and the tidal waves of media attention that goes with it. Its skilled baiting of the crypto-snobs that exist in Silicon Valley nears genius. Way to neg the entire Valley Randi. There are very few other places where people have both the intellectual firepower and free time to think so qualitatively about their identity in relationship to those around them. Or the desire to. Which is why the otherwise calm, logical people working in tech seem to irrationally hate this group of naive wannabes.

It seems like this show’s producers are directly and purposefully playing into Silicon Valley’s propensity to succumb to what Freud called the “Narcissism of Minor Differences,” i.e. how very slight shades of difference between people become the wedge that drives them apart and makes them hostile to each other. And we’re falling for it hook, line and sinker.

Proof: Here’s BitTorrent founder Bram Cohen‘s very in-depth, and granular explanation of the programming drinking game Dwight Crow and his engineer buddies play in the show. Which he knows about because he too watched the show.

In case anyone’s curious about what people were saying on that awful show last night when they were pretending to drunkenly quiz each other about tech, the derivative of e to the x is itself, as anyone who knows any calculus at all knows. The question about ‘Dijkstra’s algorithm or Bellman’s algorithm’ was probably trying to refer to Bellman-Ford.

Dijkstra’s algorithm is for finding the shortest distance from a source to all other nodes in a graph with weighted edges. It’s also known as ‘the greedy algorithm’ or just ‘the obvious algorithm’. Bellman-Ford, which I’ve never heard of before and is useful in the strange case I’ve never encountered where you might have edges with negative weight, is basically that you do a depth-first search to a depth equal to the number of nodes, and then if it’s still possible to improve the distance to a node by going over an edge from another node then there must be a negative weight cycle.

The entire spectacle is pure blogger bait: The multiple aphorisms and platitudes that come out of these characters’ mouths have become a running joke among us oh-so-important tech writers and some of the younger Valley crowd precisely because it makes all of us feel more legit in comparison. We may not know how to code, but somehow the fact that we’re not on TV pimping out our Klout status makes us feel self-satisfied and smug. Many in our startup circles attended a viewing party to collectively make fun of these poor kids.

And this is exactly what whoever makes money from this show wants.

(THE PR TEAM PITCHED US A “LEAK” OF THE CHARACTERS’ FAILED PITCH DECK FOR FUCK’S SAKE.)

But the thing about the narcissism of minor differences is that, just like Silicon Valley social hierarchy, once you’re aware of it, it’s impossible to ignore. Aspirational reality TV, like “The Apprentice” or “Top Chef” or even this thing, has become our generation’s equivalent of aspirational literature like “The Great Gatsby.” We’re supposed to passionately love/hate these characters.

Because the stars of this show are just like us!: They’re playing the Silicon Valley success lottery with their real-life tracking (?) startup Ignite, the very same 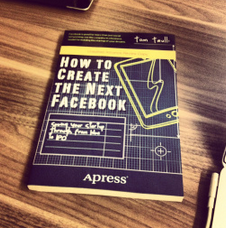 lottery played by more vetted startups like Viddy or Highlight or Instagram. We too want to feel like “the future of the world is in our hands,” to borrow a phrase. We all want to feel like we’re that kind of miracle. There but for the grace of God goes Kevin Systrom.

I guess the belief in the mythology and the hope and the naiveté is what we have in common with these kids: After all, this “How To Create The Next Facebook” book, which was sent to almost every TechCruncher in the SF office, only really needs one chapter — the chapter that reads “Timing and Some Luck.”

As Elad Gil points out, in the past 10 years, only five startups have hit valuations over $5 billion like Facebook has, and only two of those companies have exceeded a $10 billion market cap, LinkedIn and Facebook. Ninety percent of all startups started eventually stop.

Despite this actual reality, many beyond the “Start-Ups” scene are buying into the founder mythology of Systrom and Zuckerberg and Steve Jobs, and high-tailing it to SF to stake their claim in the tech gold rush, a gold rush that for all intents and purposes seems to be cycling out. “If you’re not aiming for something a billion dollars or larger, why waste your time?” Crow crowed in the trailer for that show. His startup, Carsabi, sold to Facebook for way less than a billion dollars.

Thanks @SG and Famous Tech Quotes.