Our thirst for more Internet seems to be insatiable. According to the latest data from broadband network solutions provider Sandvine, fixed network data usage increased by 120 percent in the past year in North America. The average household now uses about 52GB per month, up from just 23GB last year. That’s about 81 hours of streaming video and unsurprisingly, Netflix is responsible for 33 percent of downstream traffic, followed by YouTube and regular HTTP web browsing traffic.

As the authors of the report note, real-time entertainment remains “the largest traffic category on virtually every network we examined, continuing a trend that we expect to observe into the foreseeable future.” While Netflix clearly dominates this category, it’s interesting how far behind Amazon (1.75 percent) and Hulu (1.38 percent) are.

As for upstream data, BitTorrent continues to rise in overall volume compared to previous years, though the report notes that its overall share of downstream and upstream traffic has declined a bit over the last couple of months.

One data point that stands out in Sandvine’s numbers is how quickly Apple’s PhotoStream has found its way into the upstream top 10. Apple’s automatic cloud photo backup is now the ninth-largest driver of upstream traffic.

With all of the increased usage, of course, the question of usage-based billing once again rears its head. In this context, it’s interesting to see that Sandvine’s data shows that the top 1 percent of subscribers who make the heaviest use of their broadband connections account for a whopping 36.6 percent of all upstream traffic. The lightest 50 percent of accounts, on the other hand, are only responsible for 5.2 percent of monthly traffic.

According to Sandvine CEO Dave Caputo there can be little doubt that usage-based pricing will soon become commonplace. “With a 120 percent growth rate there is no doubt that more communications service providers will be launching application-based pricing plans that provide cost certainty and a consistent quality of experience for high-demand applications.”

As for mobile data usage, Sandvine found only modest changes. Mean monthly usage is up slightly from 312.8MB per month to 317.2MB. Here, too, real-time entertainment is the largest traffic generator (mostly driven by YouTube usage), followed by web browsing and social network traffic.

This is what it looks like when Apple releases an iOS update: 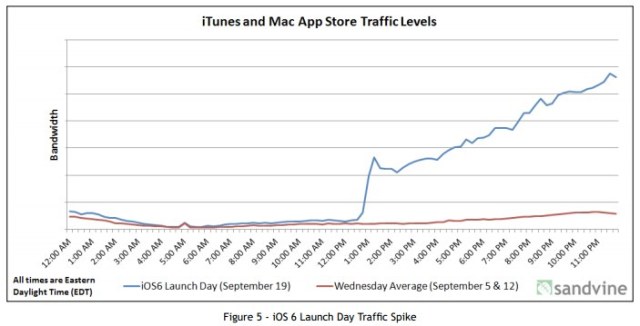