AllTrails has already built a comprehensive database of hiking, biking, and outdoor trails all over the world that its users can access on the go through its mobile apps. The idea is to become the definitive way for outdoorsy types to choose what outdoorsy things they’d like to do, and then use the app while out in the outdoors to get around. Now it’s making those maps available to a wider audience, with availability in retail locations.

At the beginning of this year, AllTrails struck a strategic partnership with National Geographic. Through that deal, NatGeo shut down its own online mapping property, Topo.com, along with all associated boxed software. Instead, the two rolled out a new, co-branded website and mobile experience together. Afterward, all Topo.com links were forwarded on to AllTrails instead.

That was the first leg of the partnership, which has been pretty successful so far. At the time it was announced, AllTrails had 200,000 users. Combined with NatGeo’s 300,000 Topo users, and it had half a million total. In the months since, the AllTrails app just hit a million downloads on iOS and Android. That growth was due in part to the NatGeo partnership, which got AllTrails a lot more visibility, and also the release of the Android app, which makes the product available on a much wider scale. 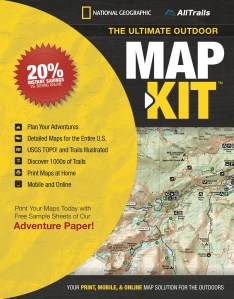 Now, the next step is underway, as the two are making the product available in retail stores around the country. The premium subscription service, AllTrails Pro, will be sold in more than 200 retailers, including REI, L.L. Bean, EMS, and Sport Chalet — basically all the places you’d expect outdoorsy types to shop at. The physical product contains a year’s subscription to the service, at a discounted cost of $39.99 (versus the usual $49.99 it charges online). More importantly, the release will give it greater distribution to be seen by those who might be interested in the product.

AllTrails has raised $400,000 in seed financing from 500 Startups and 2020 Ventures. It is based in San Francisco, and participated in AngelPad’s first round of startups last year.