It’s not even Thanksgiving yet, but some startup founders already have their sights set on the holidays. Case in point, the launch of Giftivo, a new Facebook-enabled gift recommendations engine.

I know, I know – Facebook Gifts already exists and is available as an app right on the social networking site itself – so who needs a third-party service, right? Well, in my experience, Facebook Gifts has been fairly hit-or-miss in terms of its suggestions. For example, Facebook thinks I should buy my husband a vintage-style apron, slim designer pen, kids puzzles, and chocolate bars. Um, what? I assure you, the engine is misfiring here. 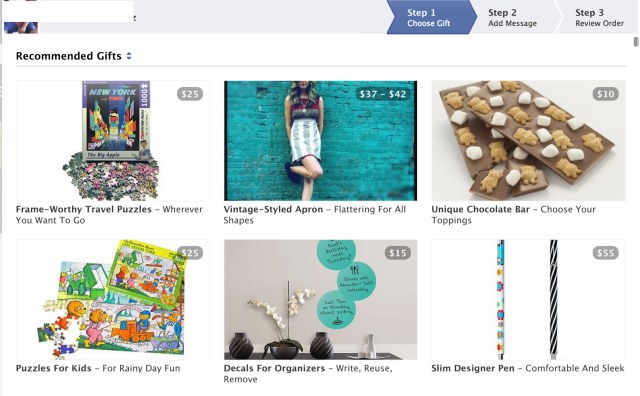 Other Facebook-enabled gift finders do a slightly better job. Continuing with the same example, Walmart’s Shopycat recommends I buy the husband a copy of Forrest Gump (a movie he likes), a White Stripes album (he’s a fan), or Xbox Live cards or games (and yes, we own an Xbox). But Walmart’s app doesn’t know which things we already own, so even these suggestions are only so helpful.

Giftivo, meanwhile, offers more detail. For starters, I appreciate how it has organized a friend’s interests into sections that include things like mobile devices, movies, music, tv shows, sports teams, athletes, and more. In case none of the actual suggestions pan out, at least you now have an idea of what things they might like – perhaps concert or game tickets, or a DVD movie that fits in with their general preferred genre (comedies, dramas, etc.). Sure, you could just read their Facebook profile for this, but it’s nice and organized here.

You can also customize Giftivo’s suggestions further by deleting any interests which you know don’t make sense for the friend whose profile you’re viewing before launching its gift suggestions.

After you click the button to see Giftivo’s recommendations, the engine returns hundreds of products – far more than the half-dozen or so Walmart suggested, and generally more on target than what Facebook was pushing. Helpfully, the suggestions can also be filtered by price, too, going from under $25 gifts all the way up to gifts over $200. The suggestions aren’t perfect (I’ve yet to find any engine where they are), but they get closer to accurate by sheer quantity. There’s bound to be something good in there. Plus, if you’re really stuck, Giftivo also serves up popular gifts purchased on the site, which can be filtered by music, TV, movies, books, sports and “other.” 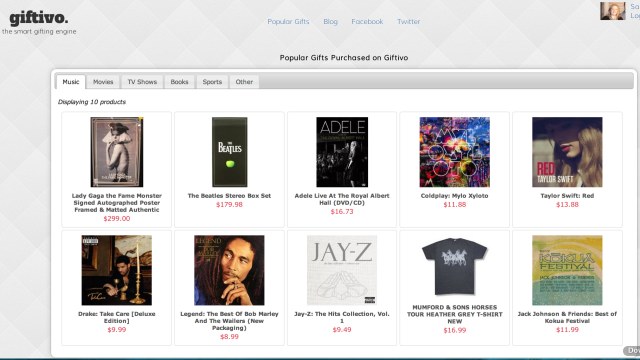 But at the end of the day, what Giftivo and other gift recommendation apps show is that figuring out what to get someone isn’t a task that can be accomplished by social media alone. What the husband really wants this year isn’t listed on these services, but it’s been mentioned in offline conversations more than once. The best gift discovery engine, therefore, still involves listening to people and being their friend. Go figure.

Giftivo was created by New York-based Brett DiDonato, who notes that a developer friend helped him get it off the ground. And yes, there are tons of startups out there who have hacked up similar efforts in the past (and god help me, they email me every time I post on this topic), but Giftivo has a simplicity and polish which some other sites have lacked, in addition to its fairly decent recommendations. But as they say, your mileage may vary, as it always does.