Microsoft has licensed technology from Wi-Fi hotspot locator, Devicescape, to power Wi-Fi maps in the Data Sense feature of its Windows Phone 8 platform. Devicescape maintains a network of 11 million+ crowdsourced and “curated” hotspots, which it tests for quality, availability, speed and reliability — with the point being to make it easier for users to locate a working wi-fi hotspot, by sifting out poor quality hotspots.

The company has previously inked a deal with Intel for Ultrabooks connectivity, and also lists RIM, Samsung, HTC and Motorola among its customers. In an amusing historical twist, Nokia, now an OEM partner of Microsoft’s mobile platform, partnered with Devicescape way back in 2007 to smooth the way for users of its devices to log onto wi-fi networks.

Devicescape said its data will be made available as “a core capability in Windows Phone 8” from next month. It will allow Windows Phone 8 users “to locate free and popular WiFi hotspots”, noted Reid Kuhn, Windows Phone Program Manager in a pretty uninformative statement. We’ve contacted Microsoft for more and will update with any response.

In the U.S. the feature will only be available to users of the Verizon network. Devicescape provided the following statement

A Verizon consumer with Data Sense will see the mapping feature with the hotspots in view and be able to connect to them. Other carriers in the U.S. will initially not have Data Sense nor access to the mapping feature of high-quality amenity-based hotspots. Devicescape’s CVN [Curated Virtual Network of Wi-Fi hotspots] data is used in the Data Sense application and Verizon has an exclusive arrangement with Microsoft in the U.S.

Microsoft certainly made a big song and dance about data management at its recent WP8 launch, introducing a system that compresses web pages to reduce the data download toll on WP8; allowing users to automate changes to their phone’s behaviour to reduce data usage as a monthly data limit approaches; and creating a Live Tile that can display data usage on the homescreen. (But again, in the U.S., only Verizon WP8 users will get these features.)

Commenting on the WP8 deal, Devicescape said: “Users are shown a map of quality [Wi-Fi] locations but they must connect manually,” adding: “Because Devicescape understands the unique capabilities of each location in its global WiFi network of 11 million hotspots… Microsoft will be able to present useful and meaningful data to end-consumers.”

The company confirmed the licensing deal with Microsoft does not include any automatic or background Wi-Fi syncing components — noting it is limited to “a live feed of the data that gets used in a mapping app”. 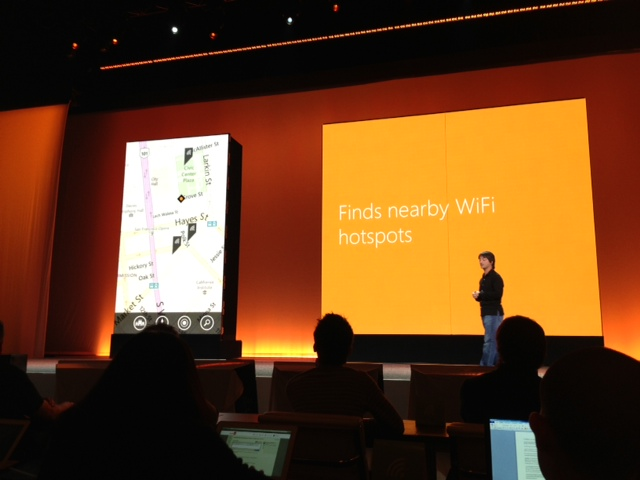