Become a political pro with a few handy web apps that will help you sort out which Presidential candidate is winning on Election Day. The first candidate to win 270 Electoral College votes will be crowned the most powerful man in the world, but only a few swing states actually matter. Because we know from recent evidence that difficult math problems can cause physical pain, we gathered a few online tools to make sense of the math throughout Election Day.

512 Paths To the White House

For those who dig probabilities, The New York Times has created a beautiful app that calculates the likelihood of Romney and Obama winning, based on which direction each swing states ends up going. We’re likely to get North Carolina’s results in first. According to the app (based on resident forecaster, Nate Silver’s, model), if North Carolina goes Obama, he’s practically guaranteed to win (with 93 percent of the 512 possible electoral college scenarios going for Obama)

If geography is more your style, or if you’ll be following the election along with TV broadcasts, which will most likely be using maps, the CNN electoral map is a handy tool. The map allows user to pick their own scenarios, and conveniently pre-color codes the states as leaning toward Obama or Romney. 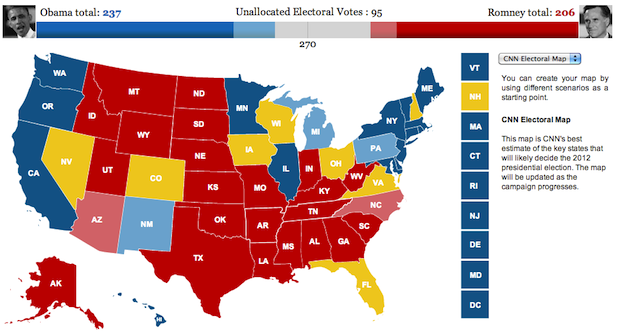