Amazon is now offering users a monthly option for its Amazon Prime service, priced at $7.99 per month, as an alternative to the $79/yearly subscription. It’s the same service as before, offering free two-day shipping, access to a free book monthly from the Amazon Lending Library for Kindle, instant streaming of movies and TV from Amazon’s Prime Instant Videos, and more. 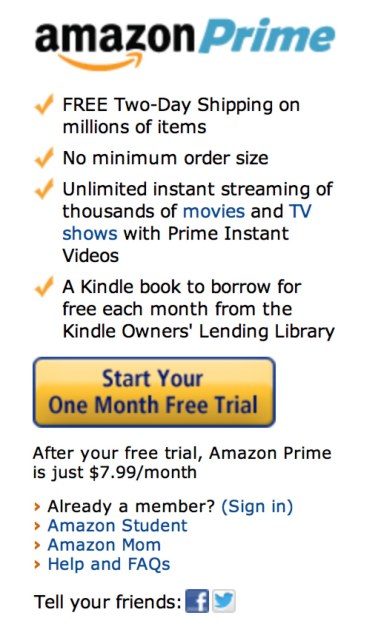 The option was originally spotted by a reader at Hacking Netflix’s website, which was then able to confirm the pricing via Amazon’s website. The site’s author Mike Kaltschnee told TechCrunch that in order to see the option, he had to not be logged into an Amazon Prime account at the time of testing. He said also had to try different browsers, noting that Firefox worked for him. For what it’s worth, we’re seeing the same $7.99/month option here in all browsers, including Chrome, Safari, and Firefox. To access it yourself, click “Join Prime” at the top right and then select the option below to sign up.

There is a large yellow button that says “start your one month free trial,” and beneath that the text indicates that Amazon Prime is just $7.99/month afterwards. That works out to $95.88/year, so it’s more expensive than the annual subscription. However, according to a help page on the Amazon website, it appears the $79 subscription is still an option for those who prefer it.

Update: Our hunch appears to be correct. An Amazon spokesperson only offered this comment on the matter: “We are always looking at ways to improve the shopping experience for our customers. We are testing a monthly Prime subscription. Beyond that, we don’t have anything further to offer.”