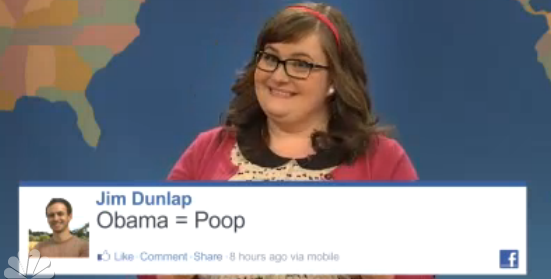 “LOL. He look like an evil dude. Zero out of ten, would not bang,” said one commenter on Mitt Romney’s Facebook page, as read on a hilariously accurate Saturday Night Live spoof of political social media comments. The satirical social media expert, “Kourtney Barnes,” explained why it’s important that “Everyone has a voice and each voice is valid, even if that voice has no punctuation.”

It wasn’t hard to lob up opportunities for pointed jokes. “Do you have any comments or people whose opinions are sort of like elequent or well-stated,” asked “Weekend Update” host Seth Meyers.

“Well that’s the beauty of social media Seth, everyone’s opinion is equal. When David Brooks of The New York Times says that Mitt Romney doesn’t have the passion for the stuff he’s talking about, it’s no more important than when Facebook user, Jim Dunlap, says, ‘Obama = Poop'”.

Check out the clip below.