Editor’s note: Steve Patterson’s observations and writing are based on his 20 years working in the primordial ooze of start-ups in Boston and the San Francisco Bay Area. He graduated from Boston College with a degree in Mathematics. A contributor to organizations such as Network World, MHT, Byte and RH he is interested in the convergence of mobile and cloud.

Silicon Valley leads the nation with more than 50 percent of telecom venture investments, and its share is growing. The reason for this is that companies such as Google, Apple, VMware and Salesforce have redefined the meaning of the telecom carriers business to include Internet, mobile and cloud with wireless, terrestrial and satellite transmission of voice and data. 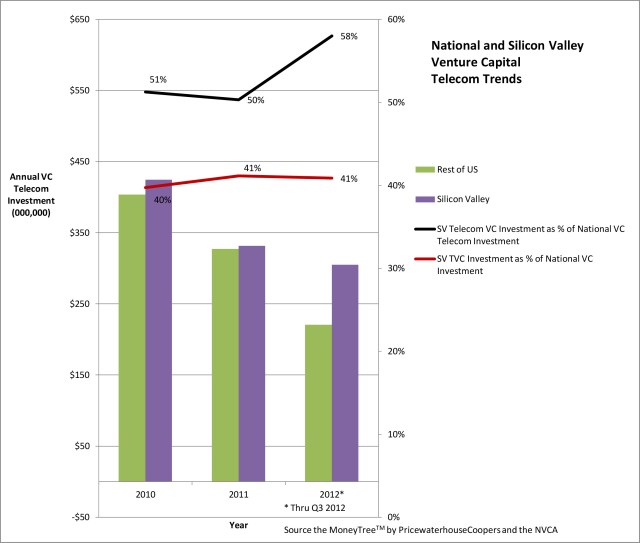 The top 10 quarterly telecom venture investments in Silicon Valley reported for the second and third quarters of 2012 by PricewaterhouseCoopers Moneytree demonstrate this change in product orientation. The new business models are usually based on services that can be hosted on standard data center server hardware and software stacks and delivered to enterprises and consumers by carriers through Internet-leveraged sales campaigns. Nicira Networks, a software-defined network infrastructure company recently acquired by VMware for $1.2 billion, is an example of this new model.

Beyond attracting venture capital, the concentration of innovation has also attracted carriers to Silicon Valley. AT&T, Sprint, China Mobile, France Telecom/Orange and Swisscom are representative of the many large and small American and international carriers that have offices in Silicon Valley. All share the common goal to accelerate R&D and product delivery cycles with innovation acquired from startups.

Carriers are struggling for relevancy because their brand identities are often diluted by the likes of Apple, Google, YouTube or other apps or services that are consumed by individual and commercial customers of the underlying carrier telecommunications services. If they succumb to the struggle, carriers will be destined to a future of commodity competition for the lowest cost mobile and Internet data services.

Carriers, like venture capitalists, are risk-averse to investing in or buying from telecom hardware infrastructure startups. But there are many startups that don’t present these risks because they deliver over-the-top services, network efficiency and consumer products and services without large capital commitments.

Examples of agile carriers Swisscom and Bouygues, as well as startups Devicescape and Ooyala, illustrate how startups can quickly win revenues and investments from carriers seeking innovation.

Ursula Oesterle, vice president of innovation at Swisscom (Palo Alto), draws an insightful distinction about risk and return. “The lifecycle of infrastructure and services is very different. Services that run over-the-top of our networks can be quickly prototyped and co-created with innovative companies with less risk and smaller investment compared to infrastructure. We are able to increase Swisscom’s return on R&D investment and shorten time to market by actively seeking, discovering and working with small innovative Silicon Valley companies.”

Ooyala (Mountain View) delivers video streaming and analytics that power video that is personalized for every viewer, location and device. Confirming the opinion of Swisscom’s Oesterle, Ooyala’s CEO Jay Fulcher reported that “Australian carrier Telstra licensed Ooyala video platform within 8 weeks of first meeting because the investment and risk of a service is limited and because of Telstra’s imperative to accelerate innovation and entrepreneurship by leveraging start-up R&D.” Telstra also led Ooyala’s recent $35 million round. Telstra’s deployment and investment commitments speak to the commercial importance of start-up innovation within a large carrier.

Devicescape Software (San Bruno, Calif.) CEO Dave Fraser says carrier adoption cycles have become consumerized. “Carriers selling cloud apps, consumer products and services, and serving advertisements have to be much more nimble and innovate faster.” Devicescape rolls together millions of distinct, free amenity-based Wi-Fi networks to offload mobile carriers’ 3G and 4G networks to save them money. The company initially focused on tier-2 mobile carriers, such as U.S. Cellular and MetroPCS. “This type of smaller carrier by necessity has more experience leveraging its own R&D budget with start-up innovation and adopting disruptive technology more quickly,” explained Fraser. Devicescape’s first sale took about a year. Since then Fraser has found that “carriers are beginning to act on imperfect information where risk is manageable.”

French mobile carrier Bouygues reached agreement with Devicescape in only six weeks. Stephane Allaire, who heads the Silicon Valley office of French carrier Bouygues Telecom, sponsored Devicescape’s deployment. Allaire believes that “taking smart risks with startups is a great source of innovation.”Allaire, who has sourced 15 Silicon Valley innovation relationships, thinks that “we have to take risks with small companies to go faster, and we can work with much smaller companies earlier in development than Devicescape when innovation presents itself.”

Sharing perspectives gained from organizing more than 150 meetings and events between carriers and startup innovators, Liz Kerton, president of the Telecom Council of Silicon Valley, said, “In recent years our membership of new and returning carrier sponsors has increased, as has carrier search for external innovation from startups.”

Silicon Valley is an advantage to telecom entrepreneurs: Their close proximity to Internet, mobile and cloud leaders gives them a unique product-development perspective and greater access to capital. Close proximity to innovation-hungry carriers with an interest in buying and/or investing in startups improves the likelihood of a telecom startup’s success.