Without this new tutorial and the addition of in-line controls, rookie Facebookers would have to dig through privacy documentation and uncover controls buried in the site’s setting pages. They might’ve never done that, and then been alarmed to know Facebook uses their data to target ads, or that people could do a reverse look-up on them through their phone number. 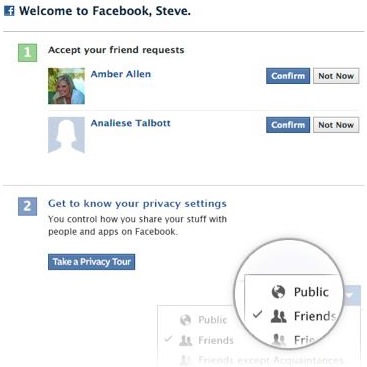 If users get get burned by privacy confusion early in their Facebook experience, they might enter less personal info or ditch the site entirely. Especially in key, mature markets where Facebook is running up against market saturation, it has to make every sign-up count. It can’t afford to alienate these high lifetime value users.

“At Facebook, we’re committed to making sure people understand how to control what they share and with whom. We’re pleased to be rolling out more prominent and detailed privacy information to new users as soon as they begin the account sign-up process and we appreciate the guidance we’ve received from the Irish Data Protection Commissioner’s Office as we strive to highlight the many resources and tools we offer to help people control their information on Facebook.”

Facebook mentioned that the changes were made that it received guidance on the effort from privacy regulators in the US, Canada, and Ireland. In fact, educating users about how their data is used and what Facebook stores about them was a core demand of the settlement Facebook made with the Irish Data Protection Commissioner’s Office last December.

By then it was already getting more serious about privacy education and making controls more accessible. It added in-line controls to the news feed publisher and profile plus launched tag review in August 2011. One shortcoming in today’s updates, though, is that none of this new education is showing up on mobile, which is where a lot of signups are coming from, particularly in emerging markets. 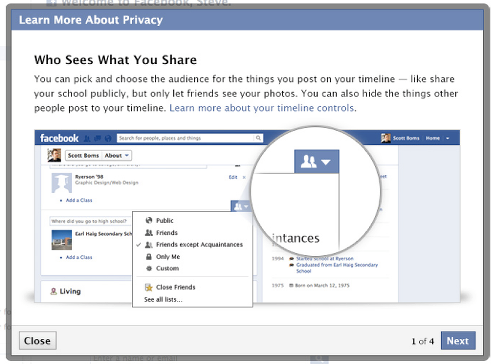 If the new user education works, people could have less surprises later in their Facebook experience. That means fewer angry users complaining to regulators, or spreading negative feelings about the social network. Since Facebook’s business model thrives on the data its users volunteer, making sure they feel comfortable on the site is critical and this enhanced sign-up flow should definitely help.

There’s just one problem. There’s 1 billion existing Facebook users that didn’t benefit from this education when they signed up. To get them to keep adding personal info that powers targeted advertising, game recommendations, and ecommerce suggestions, it will need to get them up to speed as well.

Facebook is trying its best, using tool-tips, tutorials, and PSA ads to spread understanding. But it’s a tough challenge since Facebook hosts so much of our online identity, and if you ask the average user, they might not say they totally get it.