As with Pagemodo, SplashPost has also been designed with the goal of making it easy for anyone to use, including non-technical folks without programming skills – aka “marketers.” The service offers a walk-through wizard with built-in templates that Page owners can customize to their liking, either choosing from the provided color schemes or using a color picker to select colors that better match their own branding. Templates are provided for a number of functions, including promotions, coupons, email subscription sign-ups, video posts, and more. Page owners can also type in their own text and subheading and upload photos to complement each post. 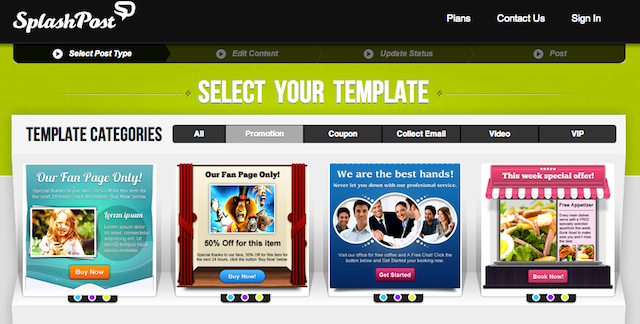 Another key feature is the ability to include clickable buttons within the post (you can see an example here), which can direct fans to another URL. These buttons can also be used to direct visitors to one of the brand’s custom tabs on their Facebook Page. Following the debut of Facebook’s Timeline, you’ll recall, the social network took away the ability of Page owners to set a particular tab as their default landing page, which has hindered businesses’ ability to use some of Facebook’s more advanced features for marketing purposes. Previously, Page owners would use tabs to set up welcome apps, offer contests or coupons, or require users to “Like” a Page for access. While SplashPost can’t override Facebook’s Timeline, of course, it can help bring increased exposure to those now-neglected parts of Facebook Pages.

On the backend, SplashPost lets the business view detailed analytics about how each post performed, showing post and button clicks, the cities and countries of the users who viewed the content, the time of day it was seen, the number of times a video was played, and the number of emails SplashPost collected, among other things. Based on these findings, Page owners can then use SplashPost to schedule subsequent posts in order to engage with fans at the time of day when their message is most likely to be seen.

Kjeldgaard tells me that the service soft-launched on October 16, but he hasn’t done any formal announcements, and therefore doesn’t have an install base to speak of just yet. As a sole founder (“one-time entrepreneur, forever entrepreneur,” he says), he’s bootstrapping the startup for now from his home base in Bangkok, Thailand, and is not in need of outside funding at this time.

The pricing models being tested at the moment are not set in stone, but currently SplashPost is a freemium service with paid plans available for $24 and $97 a month, offering additional features like email export, support, and removal of SplashPost branding, for example. You can sign up to try a single post for free.