Apple’s launch of its new mapping service, the ensuing backlash and management shakeup, have been anything but its proudest moments. Adding insult to injury, as Kim-Mai reported two weeks ago, Apple’s pain quickly turned into a gain for other map makers. However, for most, this was only a temporary blip. Only one company was able to sustain increased marketshare: Waze, which saw its share of U.S. iPhone users jump from 7 percent to 10 percent.

Of course, while Waze has been able to benefit from Apple’s stumbles and continue to grow its user base, in the end, quality product and user experiences tend to matter more than size. So to sustain its traction, Waze is today betting that it can continue trending in the right direction and avoid those pesky diminishing returns by offering a more socially-integrated user experience.

In addition to its newly designed maps, moods and interface (graphic redesign), Waze now allows users to see friends that are driving to their destination, along with the ability to share drives, pickups and meetup spots and communicate status from the road. Users can now also check in to their destination without leaving the app.

On top of that, Waze is adding Facebook single sign-on so that drivers can log in from The Social Network and take their social graph with them on their drives. More importantly, this Facebook integration allows drivers to collect friends around a shared destination point, distribute directions, short cuts and all that good stuff.

Waze also now serves convenient shortcuts so you don’t have to continue navigating, you can mute audio directions, drop parking pins and track friends and loved ones on their route to and from destinations. 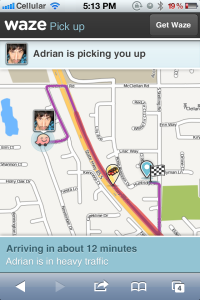 This new social functionality could be attractive to many Waze users, especially because it saves them from having to explain where they are or do so by text (probably while driving). Instead, users can send a pick up request to friends, which shows the recipient their location and allows them to navigate directly.

While you wait for your friend to pick you up at the bar, you can watch a live map of their route and get an ETA, even if you don’t have Waze. That last part being a key differentiator with, say, Lyft, which offers a live-ish view as you wait for your pink mustache ride to arrive.

On the one hand, this experience could be great for kids (and spouses), because they no longer have to ask mom when she’s going to be home for dinner. They can just follow her homebound progress on Waze, with an updating ETA. On the other hand, for teenagers, philanderers, fugitives and anyone who doesn’t want parents, loved ones, or the local police force following their every move, there’s a chance this socially integrated, realtime GPS tracking might not be so appealing.

To address this, Waze has built privacy protection mechanisms into its new social experience, which allow users to control the way in which they interact with the app’s new social layers. Most importantly, this includes the ability to “go invisible” and hide from the map at anytime. Though I’m sure moms will figure out how to hack their way around that roadblock.

The fact of the matter is that, leading up to the launch of iOS 6, many were cautious in their future predictions for Waze — given that Apple was set to debut built-in turn-by-turn directions and that Google had already done so for Android. Those doubting the long-term viability of third-party navigation apps were far from crazy. 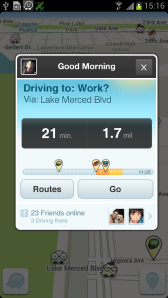 Of course, Apple Maps disappointed to say the least and Waze’s growth has shown no signs of slowing down. In fact, for Waze, sustaining its gain in marketshare in the wake of the Apple Maps fiasco ended up being one more quiet victory in what appears to have been a series of quiet victories for the Israeli navigation and traffic app.

To wit: In July, Waze announced that it had reached 20 million users, half of which were added over the previous six months — with 1.8 million new users joining in June alone.

Of course, this is a marathon, not a sprint, and iOS navigation will get better. But with reliable directions that improve with scale and by offering in-transit communication and social functionality, check-ins, Facebook sign-on, automatic shortcuts, private messaging, and features like the indication of toll road usage in routing, Waze’s stamina (and defensibility against the Big Boys) is starting to look a lot more convincing.

Waze on the App Store here and Google Play here.