We’ve had such a great response and such persistent requests for additional tickets to the Northern Meetups that we’ve decided to release some more. While about 800 of ya’ll will be able to hang out with us, all at the same time, we’re gonna give a few more tickets and let folks in on a 1-in-1-out basis. So grab a ticket and come on down early so you can be one of the first 800 folks in the door. Drink tickets go to the first 800 folks that show up, but if you miss the free drink tickets, well, you can always buy a beer and hang out. This is quite literally the last time we’ll release tickets so get cracking.

There are just a few tickets left for the Detroit and Chicago meetups; Toronto sold out within a matter of days, so RSVP now. If our past meetup tours are any indication, hitting up the Great White North should be a real hoot.

We’ll be at awesome venues like Toronto’s Steam Whistle, Detroit’s Hockey Town Cafe, and Chicago’s Zhou B Art Center, and more TechCrunchers than ever before will be in attendance. Here’s the whole roster: Jordan Crook, John Biggs, Matt Burns, Colleen Taylor, and Darrell Etherington, Romain Dillet and Elin Blesener.

Apparently we chose a Chicago venue that is a bit out of the way. The space is awesome, but a bunch of readers indicated it’s hard to get to. Uber heard your cries. Enter the promo code, ‘TCNOVCHI12’ in the app or at Uber.com, and you’ll receive $10 off black car rides to/from the event. For more information, check out uber.com/chicago or tweet @Uber_CHI.

The most important thing? We have some great sponsors. They stepped up when few others would and for that we’re grateful. Here they are:

Partners
Ford is loaning us some cars to ride around the lonesome north.

New Relic is supplying event T-shirts, which is amazing. 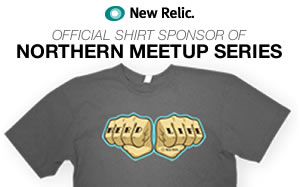 And our other awesome sponsors: