Senzari, the Miami-based streaming music startup offering an alternative to Pandora in both stateside and international markets, is today announcing it has acquired Berlin-based wahwah.fm. Founded in 2010 by Philipp Eibach, wahwah.fm is a location-based music app for iPhone that previously allowed users to broadcast their own personalized radio stations, which nearby folks using the app could pick up and listen to live.

Terms of the deal were not disclosed, but Senzari says this was an all-stock deal for 100% of the company, including the technology, the broadcast licenses wahwah.fm had to legally stream radio music in Germany, as well as Eibach’s technical experience. WahWah.fm also had a couple of freelance developers on staff, and talks are now underway to determine whether or not they, too, will be joining Senzari. However, according to Senzari COO Demian Bellumio, it was Eibach who was the key acquisition here, and he will now form the base of Senzari’s soon-to-be-expanded Berlin team. Of note: Senzari, which is live now in the U.S., U.K., Spain and Brazil, has yet to enter Germany.

Following the acquisition, Senzari will hire around 10 more people to work alongside Eibach in Berlin. Specifically, the company is looking for a data scientist, as well as more mobile developers. While wahwah.fm was an iOS application, Senzari plans to eventually bring its service to iOS, Android and Windows Phone, Bellumio tells us. The first mobile application, which will include similar functionality to what wahwah.fm once offered, should launch on iOS by year-end. 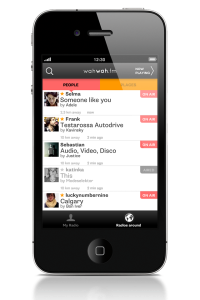 For those unfamiliar, wahwah.fm allowed users to put their location on a map, and then create playlists that could be found by that location. Users could follow broadcasts, post wall messages and track the number of listeners they had. TechCrunch’s Mike Butcher once likened the service to a “Foursquare for sound,” in fact.

That co-listening idea was what really appealed to the team at Senzari. “In the old-school days, people used to listen to Walkmans, and they would have the adapter that let you put in two headphones and listen together,” explains Bellumio. “Basically, [wahwah.fm] started with that idea…that music is social, especially within the mobile context, and people should be able to engage in an experience together.”

He said that this concept was especially popular in cities like Berlin, where people could listen in on others’ streams while riding public transportation, for example. “Mobile is where we’re really going to double-down on Senzari as a service,” he adds, explaining the interest in acquiring the small startup.

Senzari, which offers a streaming catalog of over 10 million songs, is backed by $3 million in funding from 500 Startups, and a number of undisclosed private angel investors in Miami, Boston, and Silicon Valley.