In this month’s report, app store analytics firm Distimo examined how the top 100 global brands approach the Apple App Store and how well they perform. Not surprisingly, most now have a presence there – in fact, only 12 do not. The most successful brands in terms of downloads are also not a huge shocker: Apple, Disney, Facebook, Google and eBay.

Distimo cited the Interbrand 2012 Best Global Brands report — which lists the top most valuable brands — as the source for its top global brands in its report. When the company looked into this data last year, the question it was asking at the time was which global brands are using the App Store? Today, most do, so the question has changed. It’s not a matter of who is participating, but is instead about what that presence looks like and how well it works for the companies in question.

For many of the brands examined, their mobile applications serve the company’s marketing efforts, or they support the company’s main product, such as the case with Facebook, whose app offers an easy way to access the social network on mobile. Others use the App Store to make money directly, such as with Disney’s paid applications.

Several brands which didn’t have an App Store presence in 2011 do today, including Dell, Moet & Chandon, Budweiser, HSBC, Johnson & Johnson, and Smirnoff. As of September 2012, these companies have between one and 10 applications available. Those among the top 100 who still don’t have an app are Nokia, Nintendo and BlackBerry, which compete with Apple. But the list also includes Gillette, KFC, Corona, and Jack Daniels, whose decision to opt out is less clear.

Those brands with the most apps in the store are (in order) Sony, Disney, Samsung, MTV and SAP.

But just offering apps for download is not the key thing here; it’s about reach. Are consumers actually downloading these apps, Distimo wanted to know? Looking at the top charts, Apple’s own apps, as well as Facebook’s and Google’s dominate. Only Disney (with Temple Run: Brave) was also able to crack this top 10, and it’s the only paid app there, too. But its placement in the chart is due to a promotion where the game was offered for free and then featured in the App Store. Ninety percent of the game’s downloads came in during this time. Also of note, all the brands in this group, save for Facebook Messenger, are universal apps. 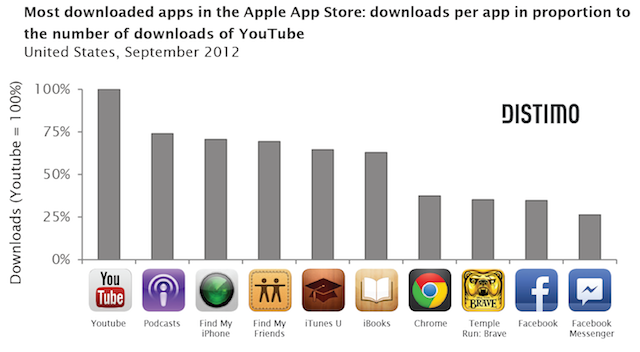 Google, Interbrand’s fourth most valuable brand, generated the most downloads in September, following the YouTube’s app launch that same month in preparation for the release of iOS 6. YouTube generated more downloads in 20 days than the apps from the other top brands did for the entire month.

Among the apps that mainly serve to promote the business, IKEA’s Catalog was tops (#32 of the 100). For comparison’s sake, others like Ford’s Mustang Customizer, My L’Oreal Colorist, ZARA for iPhone and H&M still rank lower than 90 in the ranking of the top apps and have generated less than 2 percent of the downloads of YouTube.

Keep in mind that being a valuable global brand doesn’t necessarily mean the company will also have a notable position in the App Store. Coca-Cola and IBM, for example, are negligible in terms of downloads, when compared with Apple, Facebook, and Google, Distimo points out. 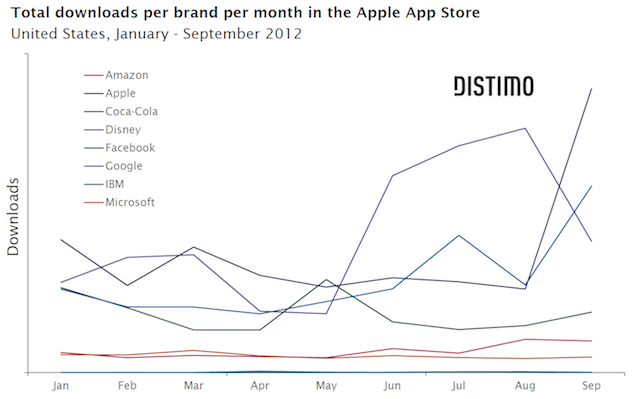 More data is available in the full report on Distimo’s website.