Which mobile device you use says a lot about your buying habits. That’s why Facebook has begun allowing advertisers to select which devices and operating systems their Facebook mobile ads appear on. This lets Android app developers avoid wasting money advertising to iPhone users, and lets luxury brands target people with iPads.

Our tipster Amit Lavi, director of marketing at EasyHI, gave me the heads up on the new options. Facebook confirmed to me it quietly unlocked the new device and OS mobile ad placement options when it officially launched its new mobile app install ads two weeks ago. These ads let developers pay to show links to their App Store or Google Play apps in the Facebook mobile news feed. Facebook needed a way to make sure devs were reaching users on the devices they build apps for. 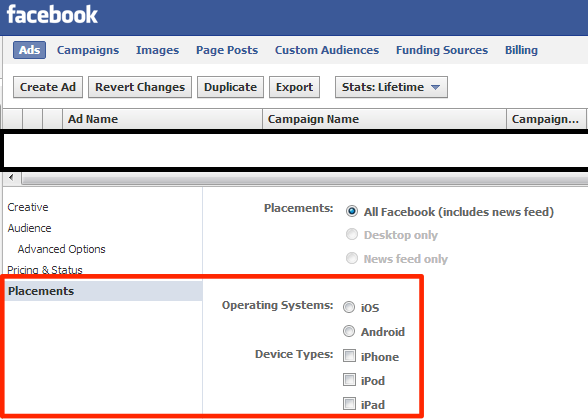 For now, developers using the Facebook Ads API or Power Editor can choose to show their ads on iOS or Android devices in general, or target iPhones, iPads, or iPods specifically. Sorry, Windows phone, BlackBerry, and everyone else. For now there’s no way to pinpoint specific device models like the iPhone 5, but if it’s technically possible, expect Facebook to offer model placements in the future.

Device and OS placements are somewhat similar to Facebook’s “broad category” device targeting that lets advertisers reach people with specific makes and models of phones like LG Androids or iPhone 5s. However, these ads can show up on both desktop and mobile. Placement targeting lets advertisers choose where they show up, not just to who. 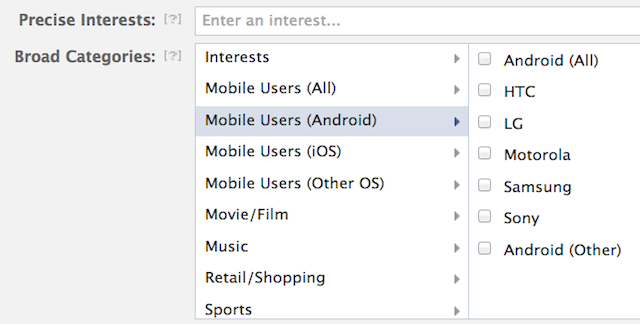 While originally designed to help app developers, there are plenty of other businesses that can take advantage of the new placement targeting option. An iPad accessory maker could target that device. Meanwhile, businesses with teenage customers could target iPods that are popular with those too young for iPhones with full data plans.

And there’s also the Android vs iOS socio-economic divide. A recent Forrester study found that iPhone-using households had an average yearly income about $16,000 higher than Android households. That means operating system and device type could augment data like biographical info, interests, and work and education history for targeting high or low-end products via Facebook ads.

Facebook is desperate to become a mobile advertising company. It’s got the data to do it, luckily. It just needs to find more creative ways like this that turn what it knows about us into reasons businesses should pay.