Of course, it’s hardly alone in releasing a Windows app this week, since the Windows Store itself just launched, with a reported 3,500 apps. However, Shufflr co-founder Rajnish (he goes by one name) pointed out that in the video category, most of the big names like YouTube and Vimeo are absent. (At least in an official capacity — there are some YouTube-viewing apps built by third-party developers). So Rajnish argued that the Windows launch presents Shufflr with an opportunity that it didn’t have on other platforms, to claim massive user base before there’s too much competition.

Rajnish also gave me a demo of the Shufflr app. The basic concept is the same, with The Daily Fix section presenting a mix of videos that were shared on Facebook or Twitter, and that are recommended based on your social network activity, your location, and what’s generally trending. (Social commentary is presented alongside the videos.) There’s also a Flip Side section where you can focus on different video channels based on topic or publisher. 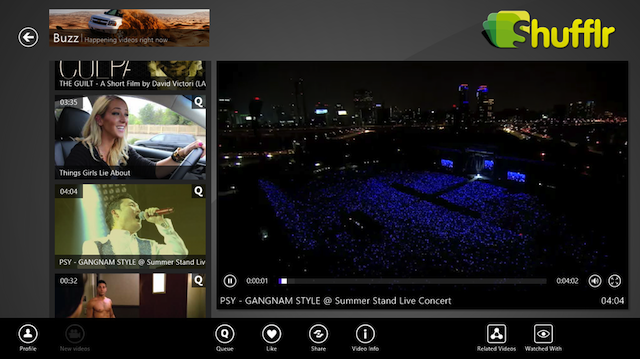 While the concept is the same, the app has been redesigned to match the Windows UI, and it’s also super-responsive to both touch and mouse navigation.

Rajnish said that Shufflr has been installed 4.7 million times. And again, he’s hoping for a big boost from Windows — but even if the Windows app doesn’t turn into the huge hit that he’s hoping, the launch is still important for Rajnish’s goal of making Shufflr available on every platform.