Better late than never. With less than two weeks to go before the U.S. presidential election on November 6, Microsoft’s Bing just unveiled Bing Elections. The site features news results from major U.S. publications that can be filtered by political preference (right, left, center), as well as an interactive map with election results and sentiment analysis across key issues based on data from Twitter and Facebook.

It’s surprising that Bing is only launching this site so late in the game, but the result is actually quite interesting. Google, of course, had a bit of a head start here, as the company has been running its election hubs for quite a few U.S. and international election cycles now. For the most part, Google offers its users a bit more data to delve into. Bing Elections, on the other hand, puts the emphasis on news and social features. 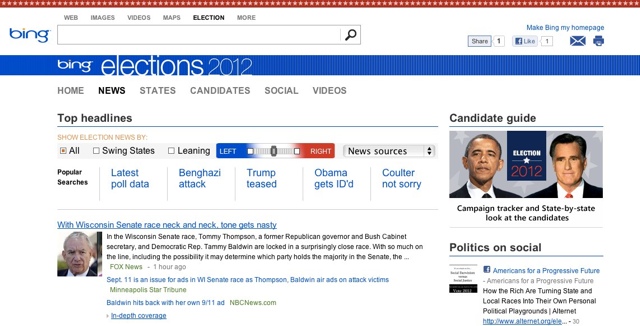 The most interesting and unique feature about the site is probably the news site that, as Microsoft puts it, “lets people filter the news the way they like it.” Whether that’s a good thing or just another way for people to comfortably live within their own online bubble is something our own policy expert Gregory Ferenstein is probably better equipped to answer, but the filter itself seems to work rather well. It seems to be based more on the political leaning of the different publications in Bing’s index than on an analysis of the actual stories, though.

Here is the full run-down of all of Bing Elections’ features:

• Unique left to right news selector lets people filter the news the way they like it, including from the right, left or center perspective. Just click on a box and see the news of the day filtered accordingly.

• Bing is also the only search engine with strategic partnerships with Twitter and Facebook to deliver unique social sentiment analysis across key election issues. The Bing Election hub helps people easily find and participate in trending conversations that matter most.

• Voters uncertain of their polling places can use Bing Elections to find out where to go vote, as well as experience exclusive videos from Chelsea Clinton and Mary Ann Huntsman urging everyone to get off the couch and vote in this critical election.