For decades, the IDE has served as the basis for app development. They are associated with a single or multiple programming languages. Microsoft Visual Studio, Eclipse and NetBeans are all examples of IDEs.

Telerik’s Doug Seven said in an interview that the problem with IDEs comes with the tedious requirements to building and deploying apps. IDEs are software tools made for a time when the cloud meant building a server for customers to access applications. Today, developers deploy to the equivalent of server fabrics that run apps in a shared environment.

Icenium brings all mobile development to the cloud – turning SDKs, compilers, testing, debugging, digital certification into cloud services so that developers can build apps on any device and in any development environment — untethered to a physical place or specific platform.

Icenium, which opened to private beta last summer, has a build once, deploy many capability. The browser-based service gives developers a way to use their existing HTML5, CSS and JavaScript skills to create and deploy applications that run natively on Apple iOS and Google Android mobile platforms.

With Icenium, developers build hybrid applications using Apache Cordova to leverage device APIs, including those for camera, accelerometer, geolocation, and other features. Developers have access to GitHub and other URL-based Git repositories. Integrated version control allows code to be stored and versioned in the cloud, making it accessible anywhere, anytime.

Icenium has an integrated simulation environment for seeing how an app looks on a device without having to deploy it. Icenium allows developers to see what the app looks like in different form factors. A developer can accomplish in minutes what would take a half hour or more using traditional methods. 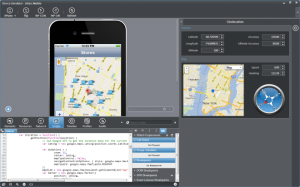 Icenium does automate many of the tasks that come with IDEs, which could make it appealing to enterprise customers looking for efficient ways to manage mobile app development.

It has similarities to PhoneGap and services such as Kii Cloud which I looked at earlier this month. These kinds of services remove complexities and speed development, helping developers who may not have deep understanding of IDEs and enterprise shops looking for faster ways to deploy apps.