Amid the flurry of prematurely posted Google earnings and Chromebook launches, Google also announced a new feature for merchants today: promotions. These promotions can be added to retailers’ product listings in the now pay-for-play search vertical Google Shopping, as well as distributed via Google Offers and Google Maps on Android. 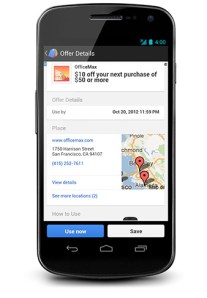 Like their offline counterpart, the online promotions are meant to encourage traffic to a retailer’s store, and make them stand out from the competition because of their sale, discount, time-sensitive offer, freebie, or whatever else the retailer wants to tout to its potential customers. But the service doesn’t only target e-commerce shopping partners who are paid advertisers featured on Google Shopping. It can also drive real-world foot traffic to brick-and-mortar stores thanks to the mobile integrations.

The Google Offers app, for those unfamiliar, is sort of like Google’s answer to Groupon and Groupon Now, but it has largely been built up on top of partnerships with deal providers. In May, however, the company integrated Offers into Google Maps on Android, and introduced a way for merchants to use a self-serve interface to target Offers customers with “free” promotions, like a “free dessert with entrée purchase,” for example. This appears to have been the first step to today’s larger roll out.

With the launch of “promotions,” Google is now expanding upon that earlier option, and ties the three products, Google Maps, Google Offers, and Google Shopping, more closely together. Instead of just listing something on Google Offers (which then syncs with Maps on Android), advertisers have the option of showing the promotion on Google Shopping as well.

Google’s system allows the retailers to create a promotions list, map it to the appropriate products in Google Shopping, and upload it to the Google Merchant Center. The system also supports user-specific redemption codes and reporting, allowing retailers to track the performance of their promotions closely.

Over 25 well-known U.S. retailers are using the service already, Google reports, including 1-800-FLOWERS.com, OfficeMax, Tommy Hilfiger, Express, Chico’s, Overstock, Guitar Center, Drugstore.com and Wayfair. The program will be expanded to other retailers in the months ahead. More details here.