WonderVoice, a Tel Aviv-based startup I first ran into at TechCrunch Disrupt’s Startup Alley, is today launching its brand-new iOS application which allows you to listen to content from Facebook while on the go. Yes, it’s another audio-based virtual assistant of sorts, joining an ecosystem that’s been booming since the debut of Apple’s Siri. And like most of these voice-activated alternatives, WonderVoice is zeroing in on a particular niche – in its case, social networking.

The startup’s intelligent voice platform lets you interact with Facebook and more, offering to read your News Feed, your messages, and your Events calendar, as well as allowing you to update your status, see who’s online, who’s nearby, and more. Thanks to integration with 8Tracks and Spotify, you can also command the app to play your friends’ music from those services. 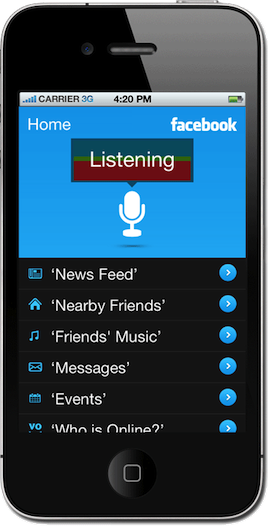 The use case for something like WonderVoice, like most virtual assistants, is limited – after all, when are you going to talk to Facebook via an app, except when driving? (Or jogging, I suppose). When I tested the app at home, for example, my husband shot me evil looks before finally pausing the DVR with an exasperated sigh. “Fine, I’ll just wait until you’re done there,” he said, getting up to leave the room.

That being said, the hands-free use case for drivers is a decent selling point – and one which other virtual assistant apps have already been taking advantage of, though generally on Android where deeper OS integration is permitted. And while it still feels a bit odd to talk to your phone, that’s mainly because the phone is still kind of bad at understanding your words and intentions. In time, that will change. And on this front, as well as on the “reading comprehension” side, WonderVoice has made progress.

WonderVoice’s patent-pending technology leverages “big data” to overcome the problems that face other voice engines today, especially when working with real-world content. (Just listen to feeds read through apps like BuzzVoice and the like to see what I mean. For example, BuzzVoice even pronounces “Google” as “Goo-gall.” We’ve a long road ahead of us here.) With WonderVoice, however, the system has been trained to recognize acronyms and smiley face emoticons and even nearby venues, so it won’t stumble over slang like “ppl” (people) when reading through your News Feed.

While there are other apps that will read to you from Facebook, WonderVoice’s founder Gal Melamed stresses that none enable this type of bi-directional communication, and all the competitors just read what’s on the page in front of them without much if any intelligence.

And when WonderVoice listens, it doesn’t require that you craft your questions using particular keywords, either. “We are crunching a lot of data in order to create a voice interface which is optimized for a specific domain – and by domain I mean like Facebook, Foursquare, etc.,” explains Melamed. “By combining that information with personal information and location information, we’re trying to build you a new type of voice interface where you basically have uniqueness.”

The company, currently a bootstrapped team with just two full timers, is working on an Android version of the app, and plans to rapidly add support for more social networks and services to WonderVoice. “Our vision is to enable a true hands-free experience,” says Melamed. “We want to be the hub for all social networks and communication.” He specifically mentioned Twitter and Foursquare as being on the radar.

The app is available as a paid ($1.99) download in the iTunes App Store here, but monetization efforts in the future may allow the app itself to become free further down the road.