Beats By Dre is best known for its flagship line of headphones, which can be spotted on hip teenagers, Olympic athletes, and high-end celebrities alike — perhaps partly because of the $200-some price tag, they’re a bit of a fashion statement among some people, so they are almost just as often being used as decoration around the neck as they are for listening to music.

But over the years, the company, which was founded in 2008 by rapper and producer Dr. Dre and music executive Jimmy Iovine, has worked to build up its stable of products beyond those ubiquitous headphones. Several years ago Beats By Dre launched the Beatbox, a line of speakers, which started as a furniture-sized item and eventually came out with smaller and more portable wireless versions. 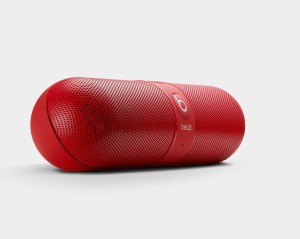 And today, Beats By Dre is going even farther into the “ultra-portable” space that rests right between headphones and larger speakers with the launch of The Pill wireless speaker.

The Pill is going right up against the Jambox, the super popular ultra-portable speaker offering from Jawbone. At $199, the Pill is exactly the same price as the Jawbone Jambox, and Beats is making no bones about the fact that this product is made to be a head-on competitor.

This launch is also a big deal for Beats By Dre since it marks its first product that has been developed outside of a partnership with Monster Cable, the electronics company it had worked with since 2008. Beats’ SVP of Marketing Omar Johnson tells me that over the past year, Beats has grown from its full-time staff count from 20 to 150, and is now focused on doing things like R&D and contracting the manufacturing in-house — becoming much more vertically integrated. This may be related to the fact that HTC bought a majority 51 percent stake in Beats last year, though Beats has since bought back 25 percent of those shares this past summer. Either way: The Pill is the first product to hit the market that has been built so completely by the Beats team alone.

Johnson was in San Francisco last week and swung by TechCrunch to give us a hands-on look at the Pill and talk about the company’s strategy overall. Watch the video embedded above to hear more about the road to this product, how Beats as a company has evolved, and what other new gadgets are on the roadmap ahead (hint: Bose, you might want to watch your back.)