Last month, we covered the seed funding announcement of AirPR, a platform that aims to connect small businesses and startups with the right PR representation. The startup is the brainchild of Sharam Fouladgar-Mercer, a former EIR at Shasta Ventures and Senior Associate at Sierra Ventures and Rajagopal Sathyamurthi, who, prior to AirPR, was a technical director at Dreamworks Animation and a software engineer at Zynga.

When asked about his motivation for founding AirPR, Fouladgar-Mercer told us that the “PR industry is horribly broken” and that, throughout his time in venture capital, he saw countless companies struggle with sourcing small PR firms and “finding the right representation to accomodate their needs.”

Today, AirPR is officially launching its Match.com for startups and PR, peeling back the curtain on its PR marketplace for the first time. Essentially, AirPR has created a tech platform that aims to increase PR performance and remove the barriers that stand in the way of startups discovering and recruiting top PR talent to help them carry out specific projects.

It does this through a marketplace, in which startups and PR talent are vetted using its proprietary matching algorithm. Once approved, PR reps can search for projects that are relevant to their strengths and quickly create proposals to bid for them.

In spite of the reports otherwise, PR isn’t dead, but (to quote Frank Zappa), it does smell funny. Rather, it’s changing, because it has to — a conclusion supported by First Capital’s development of HackPR, for example. Hell, even PR newswire is making attempts to streamline the process.

Even so, when we initially covered AirPR’s raise, the reaction to its mission was polarized — both among the media and among PR professionals. Some were incredulous over the fact that the AirPR co-founding pair would presume to be able to fix PR without having spent their entire lives within the industry. While this might seem a valid concern on the surface, the truth is that there’s been little change in public relations space over the past 10 years.

If it’s true that only PR natives can effectively solve the problems of their industry, why hasn’t that happened yet? Are they waiting for the right moment? Maybe sometime in 2030? The other, perhaps more salient argument made by my colleague and Awesome Guy Anthony Ha, is that purporting to solve PR is almost akin to startups claiming that they’re going to kill email. The email killers have been making noise for as long as we can remember, but where do I still spend 90 percent of my time? Yep, that would be my inbox.

In essence, complaining about the current state of things is easy, but actually building something that is a significant improvement on what exists today (and hitting scale) is really, really hard. Others would say that, in fact, startups don’t need better PR, what they need in reality is better products — with Color being perhaps the best example of this.

Love it when non-PR people claim to know how to "fix" our business. http://t.co/Tx70dT8J Introducing AirPR. (@techcrunch)

While there are exceptions to be sure, and we can all agree there are many over-funded features (not businesses) that will struggle no matter how awesome their PR reps. Of course, on the flip side, in the media, we have watched time and time again as quality startups struggle because of inept public relations firms. And often times, they have little understanding of how to fix that problem, on top of the fact that the available courses of action are limited and unappealing anyway. It becomes a lesser of two evils scenario.

Take two young 21-year-old technical co-founders of Awesome New Startup X: No matter how brilliant or disruptive their idea is, that doesn’t mean they know how to coherently and effectively tell their brand’s story. Startups need PR, and, like any other customer, they need to see ROI. After all, on average, PR firms aren’t cheap.

It’s not unusual to hear a company talk about how, after much hand-wringing and deliberating they decided to go ahead and pay that top PR firm their $40K fee — only to find that the top executive that sold them on the idea isn’t even handling their account or announcement. Instead, it’s the 18-year-old intern.

Having to struggle to find the right PR match and then be farmed out to junior talent is ridiculous at that cost. There really aren’t that many jobs that have the scope or outcomes that justify charging $50K. Maybe for Larry Ellison.

Of course, this is not just all woe-is-me for startups. PR professionals have a tough job. It’s not always easy to make virtualization backup and recovery seem sexy, and it makes no sense for them to have to rep businesses that aren’t in their wheelhouse. 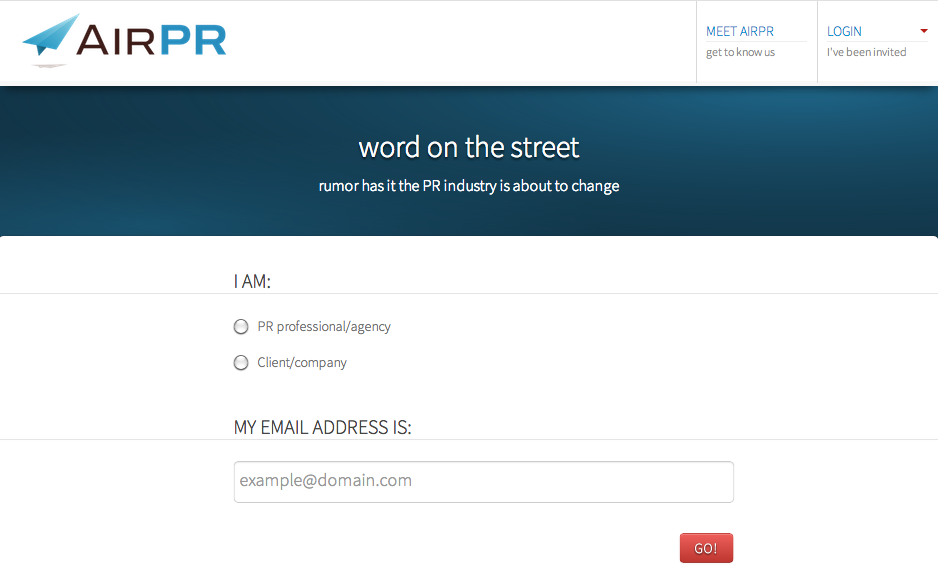 To this point, for AirPR it’s all about how effective its proprietary vetting and matchmaking algorithms can be. Sure, it can limit its platform to invite-only and keep a tight grip on who gets access and who doesn’t. But the algos serve as the mechanism by which the startup auto-populates its marketplace and matches startups to PR pros based on nine points of criteria. Those nine points include: Experience, performance, communication, price, firm size, workload, relationships, strength rank and analytics.

In turn, its client-focused vetting and matching algo focuses on budget, funding, sector focus, prior experience with PR, coverage and reporting expectations, communication tactics and some dozen others. These are informed by clients after they’re finished working with the PR talent, too. So, again, this allows AirPR to understand the attitudes and perceptions around the PR experience, assign them a value, then properly match PR talent based on client needs (while taking into account behavioral aspects of the process and experience).

@SG I just hope that AirPR is going to execute it right. Otherwise it might only make it worse.

One of the biggest missing pieces in the PR industry is accountability. There’s no tracking, and we often see PR firms or people screwing up the same thing repeatedly. By keeping the scope of this small at first, there’s less noise, and it’s more personal. Ratings from real clients could be a big step toward accountability in the industry.

As to traction? Within 24 hours of blasting out its funding news, AirPR had 727 demand-side (clients/companies) sign ups and 289 supply-side (PR talent) sign ups. By the way, 289 isn’t bad for a group apparently so miffed by the idea of a Match.com for PR. Over the past week, the AirPR team has whittled the group down to 50 clients and companies and 20 on the PR side to be the first to go through its matchmaking and vetting algorithms.

In terms of its business model, AirPR keeps the range of possible PR firms bills between $3K and $10K/month, and the startup takes a percentage of this. (Not saying how much yet.) Fouladgar-Mercer said that it may not be mind-blowing, but it’s allowed AirPR to focus on solving scalability issues that PR professionals/firms experience as they grow, giving them access to a group of talented copywriters, for example.

AirPR may not be able to fix the fractured PR industry in one fell swoop, but there’s a lot here to recommend it, and it’s going to be really interesting to see how the initial matches turn out — and how startups feel about the improvement of the PR experience, or lack thereof. One place where the naysayers do have a point, however, is that the new PR models (and technology) created need to be focused on finding better ways to build long-term relationships between startups and PR.

Right now, AirPR is focused squarely on finding the right fit for the particular project at hand; in other words, the short-term. This could prove limiting, however, the co-founder did point out that, if AirPR is able to actually find the right fit between PR and startups, long-term relationships will be a natural byproduct.