Findery lets you take photos and notes from specific locations and tag them on a map anywhere in the world for other people to see and discover. The public launch comes nearly eight months after it opened up in private beta in February, so the app is already well-populated with tens of thousands of notes and photos from around the world, all overlaid on a global map.

My first impressions are that it’s a beautiful and very addictive thing to browse through. In the “big map” view, you can click around for hours looking at people’s snapshots and reading their impressions of places. The closest existing thing that it reminds me of is the photos overlay on Google Maps enabled by its acquisition of Panoramio, but Findery at the moment feels much friendlier and more social, and it also seems to have a much stronger mobile web experience. 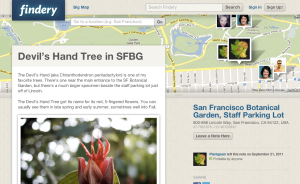 In a blog post announcing the public launch, Fake wrote that more features, including native mobile apps, are on the way:

“This is only the beginning. Maps for Notes that you can embed on other sites and video embedding within Findery are coming soon. You’ll soon be able to save the places that you’d like to visit. And yes, we continue to work on our iPhone and Android apps.”

The road to public beta

As with all startups, there have been a couple bumps in the road leading up to this public launch. Findery was previously called Pinwheel, but changed its name in July after a photo-sharing startup called Pinweel (that’s right, no ‘H’) was granted a court injunction on the use of the name.

Fake was determined to build her newest company as quietly as possible early on, but it is hard for a startup led by such a high-profile industry vet to fly under the radar for long. So it did not go unnoticed in the summer of last year when it filed regulatory forms to the SEC indicating it was raising $2 million from a group of investors that at that time included True Ventures, Founder Collective, SV Angel, Keith Rabois, James Joaquin and Shoshana Berger.

At the end of last year, Fake told me in an interview for GigaOM that her company (which at that point was unnamed) would be starting to make more public moves, saying:

“Next year will be about a change of focus, as we go from building stuff and being inward-facing to launching it and becoming outward-facing. 2011 has been about being heads down and working with the team; 2012 will be much more about going out and interacting with users. It’s going to be a gradual process — we’ll probably start off in a closed beta for a while — but it’s going to be a big change overall.”

And indeed that has come to bear. In February at the private beta rollout, Fake released some more details about her new venture, naming Redpoint, Betaworks, and Obvious as additional investors and indicating a bit more about what the app would do. This week, we are seeing the clearest and most complete look at what Findery is really about.

Fake also indicated in the GigaOM interview that she has big plans for her new venture, saying: “I want to build a community that’s as thriving as the one in Flickr.” It certainly looks like she’s off to a good start, and Findery will definitely be something to watch in the months ahead.