Today, the San Francisco-based startup Pixelpipe is adding a new feature called “Pipelines” to its file transfer service Pi.pe. The feature automates file copying between cloud services, similar to the way IFTTT automates other tasks on the web. Now available as a public beta, Pi.pe first launched in April of this year, offering users a quick and easy way to move media between a dozen online services, including Facebook, Flickr, Picasa, SkyDrive, Instagram, and others. Today, Pi.pe supports 20 services, including new addition Amazon Glacier.

A number of utilities have popped up in recent months to help users migrate files between various cloud storage or photo-sharing services, but none have been as complete a solution as what Pixelpipe provides via Pi.pe. Many of these alternatives initially generate a little buzz, but when you go back to your saved bookmarks, you’ll find they have disappeared. Others just never grow beyond some very basic functionality. Pi.pe, however, has been steadily improving.

With the debut of its Pipelines feature, Pi.pe now allows you to specify an input service, several destination services, and lets you configure the interval at which it should check for new content. For example, you could have it check your Facebook Photo uploads once a week, and have them backed up to your Flickr account. Or you could automatically have your Picasa photos moved to Dropbox every day, perhaps. Also, thanks to the addition of Amazon Glacier, Amazon’s newly announced cloud storage solution, Pi.pe now puts a consumer-friendly front end on what’s one of the best storage deals on the web: $0.01 per GB per month. Glacier, generally intended for business data archiving, hasn’t really been an option for consumers until now because it didn’t have an accessible user interface. Pi.pe changes that. 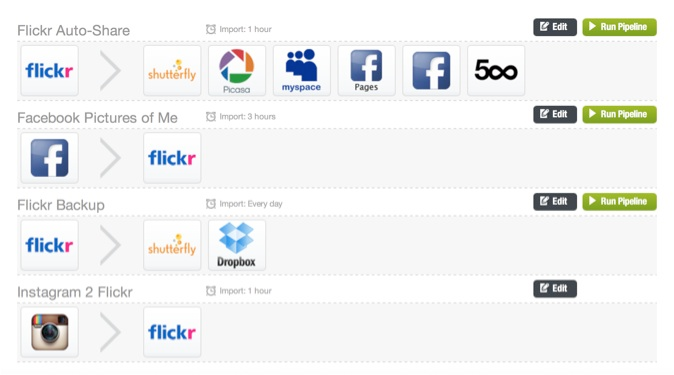 Since Pi.pe’s debut, it has transferred over 8 million files, including photos, videos, audio and office files. CEO Brett Butterfield says that one user even moved 49,000 files in a single transfer! Initially, the company believed users would just use Pi.pe for file migration, but found that many were also using it for data backup and storage, which led the company to add the automation.

Now the team is working on adding Pixelpipe’s sharing features into Pi.pe. “Pixelpipe features will just be absorbed into Pi.pe – this will be our new platform,” says Butterfield. “We’ll be plugging the mobile applications into it. Basically, it will have all the features of Pixelpipe, but just under a different domain, and a new look on the website.” He explains that the current mobile apps will continue to work, and the Pixelpipe domain will remain up as well – it’s just the website and branding will look different. This is all further down the road, however.

Why the change? “We do a lot more than pixels,” Butterfield says.

Pipelines is available now on Pi.pe, and because the service is still in beta, it remains free.