In American politics, incumbents generally have an unfair popularity advantage, by virtue of holding power and the soapbox that comes with it. Not so much is the case with Vice President Joe Biden. His opponent, Republican candidate Paul Ryan, has 10 times as many Facebook fans (4 million vs. 400k). Interestingly, Paul Ryan is so much more popular than Biden online, that when comparing the top Google keywords associated with each vice presidential contender, Google Politics found that “Ryan” was the top reason why people were searching for Biden in the first place. 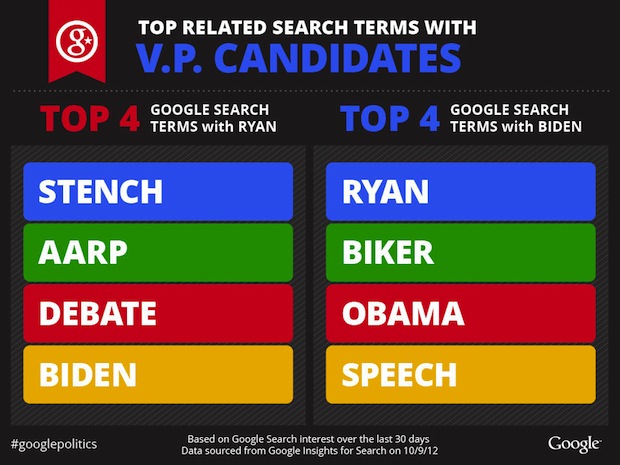 In part, this is because the often gaffe-prone Biden has eschewed public limelight for building congressional relationships and working on Obama’s prized policies. “You cannot go to a 7-Eleven or a Dunkin’ Donuts unless you have a slight Indian accent,” then-senator Biden once said. The lack of publicity has certainly underwhelmed the American public.

(For those curious about the top keywords for Ryan, “Stench” refers to a Gawker rumor and AARP is likely related to him being booed at one of their rallies.)

In other ways, Romney’s ace digital team has had an impressive social media track record, as even the social media blog, InsideFacebook has admitted. For one, they were early adopters of Facebook’s sponsored search feature, where Paul Ryan’s page comes up first when searching for Joe Biden’s.

It also helps that Ryan’s P90X dashingly good looks have been the subject of many memes, including my favorite, @paulryangosling

Hey girl, you don’t need access to healthcare, my warm, soft kisses will make you well.

Normally, we argue that social media and, especially, follower counts don’t matter much for politicians, but real-time commenting is known to influence how viewers see televised debates, and the running peanut gallery of Ryan-heads online could skew people in his favor.

You can watch the Vice Presidential debate on YouTube.