Just three weeks after Facebook formally launched Custom Audience ads that can target people by lists of email addresses or phone numbers, TechCrunch has attained the first reports on their performance and they’re promising. Not as amazing as Facebook Exchange retargeted ads, but they boost clicks and conversions, reduce costs, and deliver ROI according to Facebook and three adtech startups.

Custom Audience ads let businesses upload a privacy-protected hashed file of email addresses, phone numbers, or User IDs, and then select these sets of people as ad targets. This allows businesses to reconnect with existing customers or contacts, and are the link between customer relationship management systems such as Salesforce and Facebook ads.

By layering Facebook’s biographical, interest, and social ad targeting parameters on top of these lists, businesses can segment and reach customers with more highly personalized messages than they could without Facebook’s help. 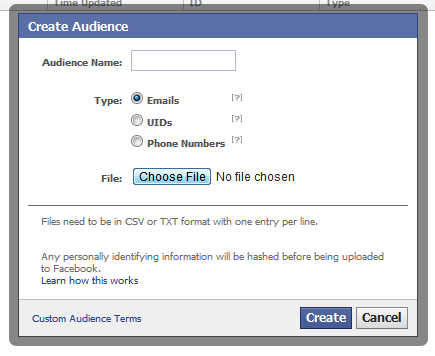 Studies from Facebook on two customers show solid benefits from Custom Audiences. One ecommerce company targeted their email list, increasing its sign-up conversion rate by 43 percent and decreasing cost per lead by 30 percent. Then again, these were partially secured already, considering the company had these email addresses.

Another ecommerce company OpenSky was looking to get members of its site who hadn’t made a purchase ever or in the last 30 days to buy something. It used Facebook Like targeting to segment its email list and deliver ads about its best-selling products in categories such as food and electronics to people interested in those things. For example, it showed ads hawking a gel pillow to people who Liked healthy living Pages.

OpenSky was able to get a 30 percent better conversion rate on its Facebook ads by targeting them through Custom Audiences. The company would have had no idea what products to show and to whom if it email blasted its entire list. Though it had to pay for the ads instead of using free email, Facebook let it match popular products to people who might buy them leading to a nice boost in sales. Not astounding, but certainly worth the effort.

Adtech Startups Say They Work Too, Just Not As Well As FBX

The Washington Post’s ad arm SocialCode says one Custom Audience campaign delivered a 15 percent lower cost per fan. Another got three times as many engagements per post as standard ads and received two times as many viral engagements such as Likes, shares and comments.

SocialCode’s CEO Laura O’Shaughnessy said “We are encouraged by these early results. This gives marketers another channel to reach specific segments of their audience with tailored messages—to reward loyal customers, win back former customers, or grow share of customer through complementary product offers.” 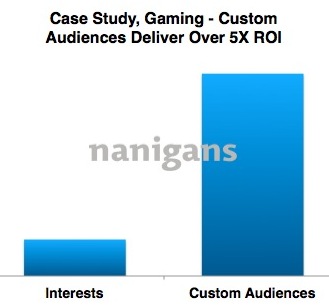 These initial stats were corroborated by ads giant Kenshoo. Todd Herrold, its senior director of product marketing tells me “We have clients testing custom audience targeting and seeing strong results. Conversion rates are higher than benchmarks.”

Simply scoring higher than benchmarks might not be as positive as Facebook would hope. Calvillo added the caveat that “in some instances we have seen greater return using other remarketing methods.”

To date, Facebook has been seen predominantly as a home for brand advertising. If it wants to keep growing revenue, though, it needs to make itself essential to other types of advertisers.

Many businesses have significant retargeting budgets that FBX is letting Facebook tap into. If Facebook and its partners can show more conclusive proof that Custom Audience ads are better than email and telemarketing campaigns for reaching existing customers, more dollars will flow its way. And importantly, these are ads no one else can serve. Google’s got retargeting, but only Facebook knows who you are, who you know, and what you like.