It was only a matter of time before Jetsetter, Gilt’s luxury travel vertical, got into same day hotel deals for travelers on the go. Another startup has been primarily playing in this space—Hotel Tonight, which just raised $23 million and is growing fast. Starting today, Jetsetter is debuting same-day, last-minute booking offers from Jetsetter-Verified hotels with the launch of “Jetsetter Now,” an update to Jetsetter.com’s iOS app.

Launched back in September 2009, Jetsetter is a flash sales site for travel, and targets a more affluent traveler who wants to stay at luxury, high-end hotels and resorts. The site has over 2.2 million members and offers anywhere from 20 to 40 flash sales on hotels or travel experience per week. The site also features a travel concierge service and regularly priced hotel inventory.

Jetsetter Now features same-day, mobile only deals at rates of up to 60% off. Deals will initially be offered in Jetsetter’s top seven markets: New York, Las Vegas, Los Angeles, San Francisco, Miami, Boston and Chicago, subject to hotel availability. What makes Jetsetter Now unique is that the hotel’s name is a mystery (which Jetsetter says provides greater discounts), and each property is Jetsetter-Verified, which means it’s been vetted and reviewed by a Jetsetter employee to meet the company’s standards.

Here’s how the new feature works. Within the Jetsetter iOS app, you’ll now see a tab labeled tonight. Same-day deals always go live at noon, says the company. You can click on what city you want to find a hotel in, and the app will show you your options. At first Jetsetter is aiming for around four deals in each of the seven cities. The app will display the best offer in up to four categories per city: Classic, Hip, Contemporary, and Luxe. Once the inventory is booked, the next best offer will display, so that earlier searches will be rewarded with the biggest discounts.

The app will show you how many rooms are left at each hotel, the ratings of the hotel, what percentage of Jetsetter users would recommend the hotel to a friend, reviews and more. You can also book more than one night, if the hotel permits. You can then click to pay with your credit card. If you have a Jetsetter profile, your credit card info will already be uploaded. But if you wish to add a profile, Jetsetter has partnered with Card.io (which was acquired by PayPal earlier this year) to allow users to snap a picture of their credit card, and the app will automatically upload all the info for payments.

The app now has Apple Passbook integration, so when you complete a reservation using the app, you can drop this into Passbook. When you get within 500 yards of the hotel, the reservation will pop up on the screen.

Rob Deeming, Jetsetter’s General Manager, says that Jetsetter Now is both the logical next step for Jetsetter’s mobile strategy, as well as a complement to the company’s flash business. 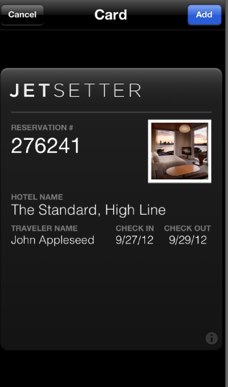 As mentioned above, one differentiator between Jetsetter Now is the mystery hotel component, in which users won’t know what hotel they are booking, but will be allowed to access rough location, reviews (that don’t mention the hotel name) and ratings. Users will learn the name of the hotel immediately after the booking is processed.

Jetsetter says that hotels are much more comfortable offering steep discounts (up to 60 percent off the regular per night rate) in this manner. And the company assures users that each hotel has been vetted and verified by Jetsetter. In fact, Jetsetter Now hotels must meet an 85 percent approval rating in post-stay member surveys, meaning 85 percent (or more) of Jetsetter members would recommend the hotel to a friend and book the hotel again. Plus, Deemings says that the mystery hotels feature has received positive feedback from users when it was rolled out on the main flash sales site earlier this year.

As I mentioned above, it was only a matter of time until Jetsetter rolled out this functionality.

The company has also been actively ramping up curation and recommendations, and mobile is a huge opportunity for the flash sales business as well. We’re told that Jetsetter is looking to expand Now into other cities, including international markets.