Polycom is one of the biggest video conferencing companies out there, but for the most part its equipment is mainly associated with huge enterprise installations. The company is trying to change that perception, with a suite of products that will not only make video conferencing and collaboration more affordable for the mid-market, but will also help users connect with business partners and clients using other systems.

Polycom’s new RealPresence CloudAxis Suite is designed to allow users to connect with anyone using a number of B2C video chat systems, including Skype, Facebook, and Google Talk. The service works with existing Polycom software deployed in either private or public cloud systems, and lets users communicate with those on other services in a secure, enterprise-grade collaboration environment.

Once users have imported contacts from other systems, they can drag and drop contacts that they wish to participate in a video conference. Once a call is initiated, contacts are sent an invitation link directly through their platforms of choice. After clicking the link, the invited contact will be taken to a browser-based conference room that will have the same features available to others using native Polycom conferencing software. 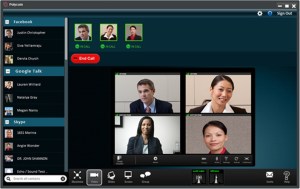 This platform is designed to break down the need for users to deploy expensive, compatible video conferencing equipment, and to expand the availability of applications such as video recording and streaming, web conferencing, and online collaboration tools. It’s also designed to reduce the risk of employees chatting with each other and business contacts over unsupported third-party clients. That said, the CloudAxis suite won’t actually be available until the first quarter of next year.

CloudAxis is just one of a bunch of announcements that Polycom is making this morning. It’s also announcing a series of new products, which will be based on the open standards-based SVC video protocol, as opposed to the AVC protocol that it uses today. Because of the change, Polycom is able to support three times the video capacity. It’s also rolling out a new, simplified user interface for all its endpoints, so it won’t matter whether users are connecting via a room-based system, on a desktop, or on an iPad — the experience and controls will be more or less the same.