Another digital step forward for the UK’s BBC today, this time involving the corporation’s radio assets: the state-owned broadcaster today is launching iPlayer Radio a new, integrated mobile web and desktop app, along with a new standalone iPlayer Radio iOS app, significantly ramping up the functionality of its radio business on digital platforms with more video, better navigation and improved on-demand options. The web app will be universally available — that is, across multiple mobile and desktop platforms, and all geographies — while the native app experience for now will be restricted to iPhone and iPad devices, and the UK only. All services, for now, are totally free to use.

But contrary to one report that came out last week, the BBC is not launching any music downloading or on-demand track streaming services with Spotify, Deezer or any of the other providers working in that area. That service was reported to be called Playlister. “Strategically, there is an obvious overlap and potential connection with music providers,” Daniel Danker, GM, programmes and on-demand for the BBC, today told TechCrunch. “There isn’t anything tangible right now, but we always have those conversations.” He described BBC Radio’s “role in the world today” instead as being “about direct output.”

There is also a chance that the BBC would need to turn around perception and use of its radio services digitally before it could offer something like this and get strong use out of it: Danker says that currently 90% of all radio listening is live, with only 10% on demand — meaning it’s not clear that many listeners at this point would look to the BBC for their on-demand streams or downloaded music services at this point.

Still, integrating what assets BBC Radio does have more tightly together is one step towards offering even more enhanced services in the future.

The radio web app is the BBC’s first comprehensive attempt to put significant investment into bringing its radio programs up to speed with the work that the broadcaster has done on its video assets: BBC iPlayer allows users to watch content on demand both over its web app as well as via native apps, adding download component to the video service this past September.

The app, meanwhile, has a couple of nice extra features in it: a dial on the channel selector is reminiscent of a tuner on an old-fashioned radio (something pointed out by a BBC radio presenter on a promotional program). Once you are in a radio station’s home screen, you have a little bump that prompts you to explore other features, such as catch-up radio shows as well as related video clips. The app also has a build in alarm for the app to work like a clock radio. Users can also select different programs and set reminders to listen to them when they are on. 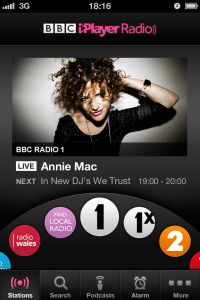 The BBC says that an Android app will be coming soon, although it will have to iron out issues with Adobe Flash first in order for the app to work across the many flavors of Android devices that are currently on the market.

Meanwhile the web apps are designed for all-screens and give a significantly more cohesive experience across the many channels that the BBC operates — these include regional stations as well as those dedicated to particular music and other genres. Before this, each interface was slightly different from others, meaning that it wasn’t as easy for users to navigate between them. As with the native app, here again it’s about integrating video alongside the audio experience. The BBC says that this is just the beginning of development with the web app, which will also feature more content direct from DJs (perhaps original content in that sense) and more “two-way conversation between audience and studio.”

“Our next steps will be to make live radio more interactive, make it easier for people to enjoy the BBC’s vast audio archive and strengthen radio’s position as the number one place for discovering music in the UK,” Mark Friend, Controller, Multiplatform and Interactive, BBC Audio & Music, told journalists at a presentation this morning.

Friend notes that users of the existing iPlayer app will still be able to access radio services through it as before, but that these will eventually be phased out. “Taking five million people through a big change is something we have to manage carefully in the next few months,” he noted.

While the web app is being turned on now, it’s likely that the iOS app will not be live in the app store until later today, the BBC says.

The move to improve the radio experience is long overdue and points to how the BBC may have slightly lost out on capitalizing on a growing audience for digital radio consumption. It says that year-on-year, monthly iPlayer requests for radio have increased 56% to 2.8m on mobile, and 300% to 1.2m on tablet up to now.

The same might be said for how the BBC chooses to approach its international rollout. For now the native app is only available in the UK, and Danker would not say when it planned to roll it out internationally. That may see the BBC adding more advertising into the app — or possibly charging for the service as it does with its existing iPlayer app.