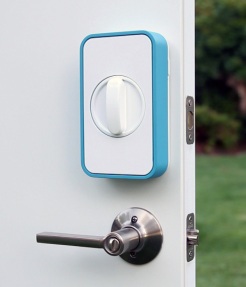 Editor’s note: After a rejection by Kickstarter, the co-founders of Lockitron, Cameron Robertson and Paul Gerhardt, decided to follow in the footsteps of App.net and take pre-orders for their innovative deadbolt add-on directly. This gamble paid off. Big time. The initial goal of $150,000 pre-orders was hit within 24 hours. Now, just five days after launching, the company has $1,500,000 in pre-orders. This is their story told by Cameron.

I’m still having a hard time believing that only a few short days ago, my co-founder Paul and I refreshed our homepage, anxiously waiting to see if anyone would subscribe to our vision for Lockitron and help us climb towards our lofty $150,000 goal. With reservations now exceeding 1,000% of our original target and most of the time left in our campaign, we are immensely thankful to our 10,000+ backers who have made this possible.

Just four months ago we squeezed in with over a hundred other hardware startup devotees to listen to the creators of some of the most popular and impressive Kickstarter projects impart their wisdom. The folks behind Pebble, Skallops and the Brydge answered dozens of questions about their success on Kickstarter; how much effort should you put into the video, did press matter, why did some projects take off and others flop. At one point, our moderator asked the group for a show of hands. “How many of you plan to release your own Kickstarter?” Nearly every hand in the room went up.

Kickstarter meant that for the first time hardware companies could take their ideas straight to the masses, bypassing the gatekeepers of venture capital, and de-risking their business in one fell swoop.

It wasn’t that long ago in Silicon Valley that the very mention of the word “hardware” in the context of fundraising was enough to glaze over the collective eyes of venture capital.

While we are just beginning to witness a renaissance of software wrapped in plastic, the traditionally high costs of making hardware, coupled with the perception of the low margins characteristic of the bygone PC-era, weigh heavily on risk-reward calculation for new investments.

So it was not surprising that Kickstarter gave hardware startups hope.

From its inception, however, Kickstarter was never designed as a store. Kickstarter’s benchmark for success is matching and exceeding the funding provided by the National Endowment for the Arts, not becoming the Apple store for yet-to-be realized products.

Last month, mounting backer frustration over project delays seemed to boil over when a series of articles ran detailing what some had been wondering; how many of these projects failed to deliver to their backers?

The question of who exactly assumed underwriting the risks for projects loomed large despite Kickstarter’s reaffirmation that creators were indeed responsible for delivering what they promised.

Consequently, new guidelines and rules were developed to meet these challenges and to protect backers using their site.

We applied to Kickstarter on a Wednesday, “Kickstarter Is Not a Store” landed on Thursday and by Friday we were rejected. We reached out to a co-founder of Kickstarter through our network. A brief e-mail exchange ensued, culminating with a firm “No” – stating that Lockitron fell into the “home improvement” category of prohibited projects. Kickstarter was simply not the right place for it, he said.

By the following Monday we knew what we had to do. We would launch Lockitron on our own, in an attempt to emulate the success that Dalton Caldwell had with App.net.

In running our own ad-hoc crowdfunding campaign, we knew that we needed to solve the same challenges inherent in Kickstarter’s model for running a hardware campaign.

Our solution was to create a customer-focused system. We decided to collect payment information using Amazon Payments, batch Lockitron shipments for customer transparency regarding delivery dates and only charge customers when their unit is ready to ship. This drives us to make the best product possible rather than overpromise what we can deliver on.

This approach also lets us know how many units to make and qualifies our backers as willing to put money down for the product when delivery time comes due, all while removing risk for them.

Since we only earn our keep once a customer’s Lockitron is ready, we are incentivized to use faster, low-volume/custom-quality production methods that may cost more initially, but will ultimately help us to compress our timelines.

Finally, this past Tuesday (October 2nd), just over a week after Kickstarter declined Lockitron, we took the plunge, fixated on our computer screens after a sleepless night filled with last minute video and website tweaks.

What followed over the next 24-hours was nothing short of stunning – thousands of people saw our vision and voted with their wallets to reserve a Lockitron, blowing past our initial goal in a matter of hours.

It’s debatable whether or not we will see another Pebble or Ouya on Kickstarter. But something I can’t emphasize enough is how much the success of our crowdfunding experiment is predicated on the groundwork that Kickstarter put in place. We are indebted to Kickstarter for validating the incredible potential of crowdfunding in bringing products to market.

Our crowdfunding method isn’t perfect. It requires that you have some resources to be able to kick off production of your product and I believe that there is room for a new model of crowdfunding.

Hardware startups need a platform that would add value for customers and producers by acting as an escrow for funds while validating and assisting fledgling hardware companies with their production plans. Consequently, we are planning to open source a skeletal version of our crowdfunding app to help start this discussion.

The power to ultimately go ahead and purchase a Lockitron rests with our backers. The onus is on us to justify and substantiate any delays along the way. Just as popular hardware Kickstarter projects have proven, it will be our willingness to involve excited Lockitron backers in our progress and turn them into happy customers that will drive our success.